There’s the old idea that given long enough, even a monkey could eventually type Shakespeare. The Tumble collection 9-Eyes takes Google Earth images–arguably the most banal and random photography out there–and finds the Shakespeare within those millions of images. Where the most interesting of my Google maps searches is usualy just to look for my car in front of an old apartment, 9-Eyes’ images capture scenes that look like they could’ve been taken by the most accomplished nature or street photographers. People in haunting poses, seemingly pivotal moments of their lives. The Awl’s Everything Changes featured the images as story starters, inviting readers to create their own narrative out of these captured moments. Few photographs beg to be explained and explored quite like these.

Time for another edition of “Thing I Love Right Now,” a.k.a. “I’m out of other blog ideas/would rather talk about stuff I’m obsessed with instead.” Enjoy!

I tend to be late to the mainstream pop culture party. I’m always a little snobby about the thing that everybody else likes, so I hang back and tend to discover about a year late that the rest of the world–gasp!–was totally right. Case in point: I cannot stop listening to Taylor Swift’s 1989 album. It started with the Ryan Adams version, which I could stream on Spotify and loooved. I knew I liked the singles from her album that had been released to the radio, and judging by how obsessed I was becoming with Ryan Adam’s sad-guy versions, I decided to take the iTunes plunge and by the original. Best decision I’ve made all year.

Every fall I renew my devotion to moccasins (Minnetonka, usually, but I’m not that picky) and every winter I get a little sad when it gets too wet and I have to put them away. This fall is no different. I even bought a new pair to keep at work (nobody has to know that they’re actually the soft-inside slipper versions– sooo cozy) in the hopes that they’ll stay more presentable and pass as semi-professional for a bit longer.

The embarrassing truth is that I’ve never actually read Little Women (I know, total girlhood fail), but I could quote just about every line from the 1994 movie version. From Claire Danes always-crying Beth, to Christian Bale’s amazingly luxurious Laurie hair, Marmie’s constant stream of truisms and Kirsten Dunst’s totally bratty Amy, it is a tour de force of warm hearts and Bechdel-tested goodness.

I bought this jacket from ModCloth (my other current obsession) a few months back, and in all my years of wearing clothes, I have never gotten as many compliments on an item of clothing as I have about this coat. It’s gotta be one of my wisest purchases to date, and I plan to wear it as far into winter as I possibly can (which is probably like one more week).

Matt McGorry is totally likable as CO Bennett on Orange is the New Black, but it wasn’t until a few month ago that I discovered his really progressive online presence. Whether shamelessly promoting vital discussions about race, or proclaiming the importance of feminism, he’s doing exactly what white dudes should be doing with their privilege– using it for good. It’s really refreshing to see someone embrace their platform to encourage these kind of discussions. He’s definitely worth a follow.

Chicago is forecasted to get 3-6″ of snow this weekend and basically this means that I’m going to be super grumpy. It’s not like I grew up in the South and don’t understand about Midwestern winters. I get them– I just hate them.

The only good thing about the 6 months of winter that are coming is that I do love getting cozy. Blankets, oversized sweaters, scarves: the cozier the better is my mantra. A cute hat is a must to get through the winter unscathed, and these new Andean-inspired knit hats from Purl Soho have totally stolen my heart.

Created through a partnership with a group of artisans in Peru and blending traditional shapes and designs with a modern twist, these hats are, first, adorable, and look hella warm. Perfect for my Christmas list. Are you listening, Santa?

These beauties are available here.

The early 70s are a fascinating moment. After the upheaval of the 60s and the backsliding of the 80s, there was a moment when things actually seemed to be getting better. The Vietnam War had come to an end, and the women’s movement was gaining ground with Roe vs. Wade and the passing of the ERA. Progress had been made in Civil Rights, and identity movements like Black Power were raising people’s consciousness. Environmentalism and nuclear proliferation were being talked about.

All these new thoughts were making it into the mainstream finally, too. You look back at early episodes of Sesame Street, for instance, and the cast is a rainbow of colors and abilities, everyone singing together, looking vaguely hippied-out and unpolished. Of course there were still problems, but for once there were glimmers of hope to be seen in pop culture– moments of progress that seem progressive, even by our standards today.

Case in point: the wonderful children’s book Blast Off from 1973.

Blast Off is the story of Regina, a young black girl who dreams of becoming an astronaut. Her friends laugh at her crazy ideas, but she eventually makes it to the stars, floating among them in her white spacesuit, riding a rocket shooting long, psychedelic trails of fire.

This is only a few years after the moon landing, and space travel was still pretty novel, as was a woman of color in space. Sally Ride wouldn’t go up in the shuttle for another decade, and Mae Jemison nearly ten years later in 1992.

In addition to being way ahead of its time, the illustrations are absolutely charming, featuring bold, graphic shapes and groovy colors. Definitely the kind of space travel I can get behind. You gotta give it to 1973– they had some good ideas.

There’s nothing like the wind in your hair and sun on your skin. Like, all your skin. Some fun and funky pieces celebrating body liberation– 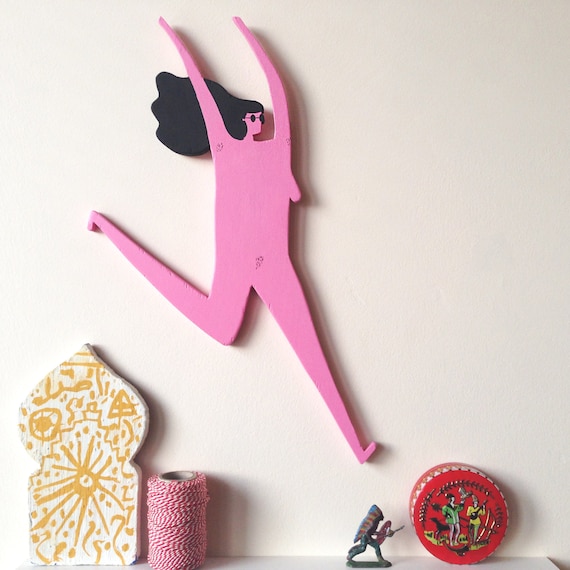 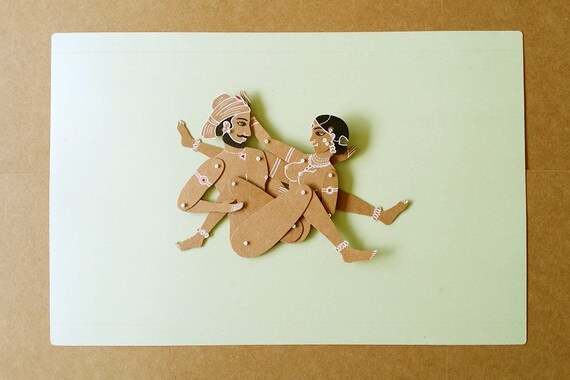 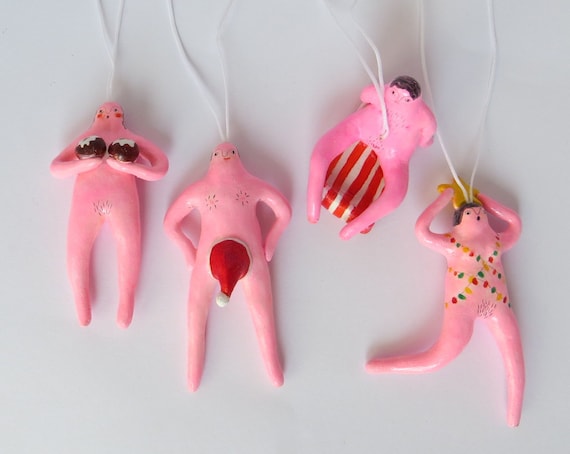 Let’s Get Cosmic by Laura Berger

For the last few years, I’ve been fairly obsessed with vintage pennants. It may have begun by seeing a photo from Andrea “HulaSeventy” Jenkin’s collection from an old house tour post that I stumbled upon years ago. When Henry was little I found on a great 40’s Empire State Building pennant at a flea market and promptly started an official collection. The fun little string of them hung above his bed for a year or so before some restless toddler fingers managed to rip off the pointy ends (*tears*).

I’m clearly not alone in my pennant obsession, because in addition to gorgeous vintage examples out there, there also seems to be a renaissance of awesome makers using the pennant as their medium. From souvenir to snarky, here are a few of my favorites of late. 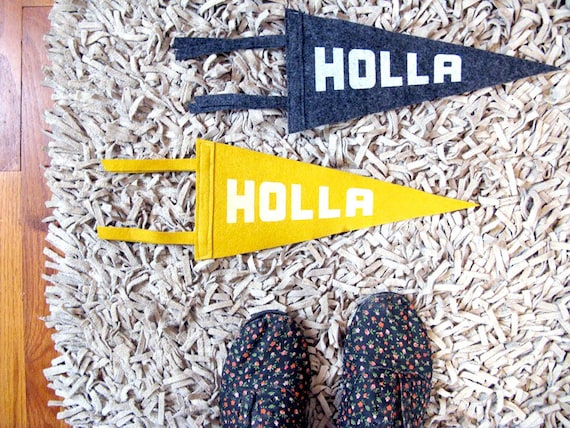 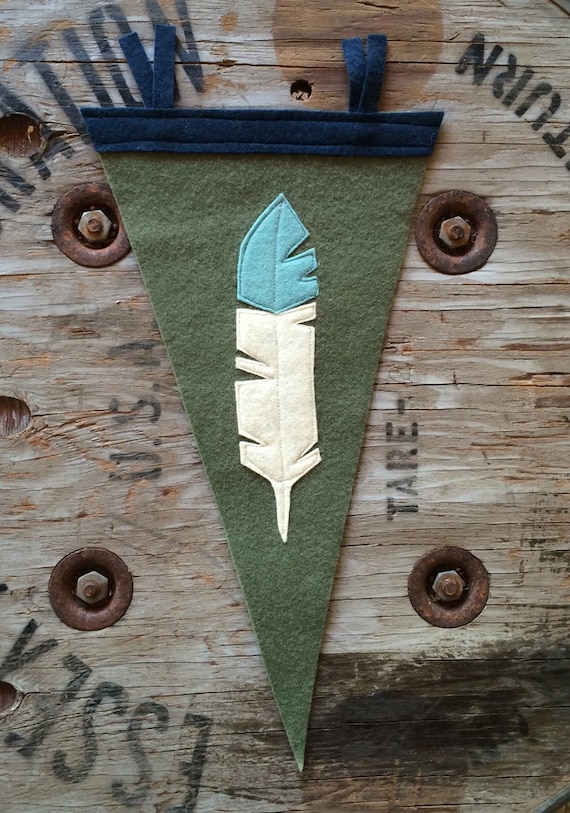 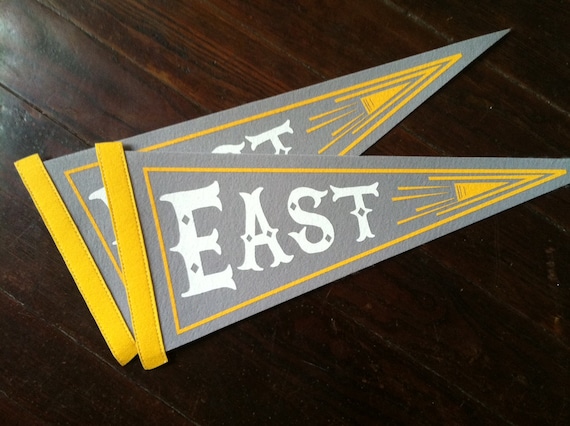 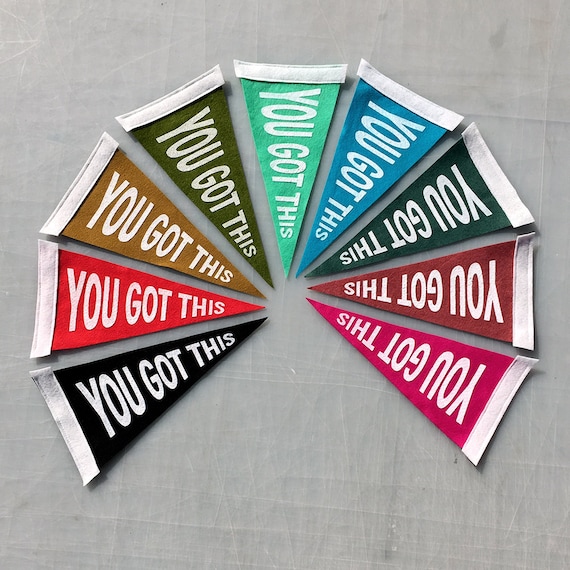 I’ve always been a maker and a pretty die-hard DIY-er. As a kid, I even resented getting “make your own whatever” kits, preferring actual art and craft supplies that would allow me to really make something myself. As I get older, though, I’ve come to embrace the art of letting other people make things they’re really great at, and stick to DIY-ing the things that are in my wheelhouse.

In that spirit, these tea towel pillow kits from Sarah Young are genius in that they, first off, are the most gorgeous screenprinted designs, and also because they retain just enough of a DIY to make a person feel connected to the finished item. Let’s be honest– I’m never going to screenprint my own folk art-inspired animal design. So why not let an expert take care of it, and I’lll handle sewing a simple outline and stuffing. Now that’s a DIY I can handle. 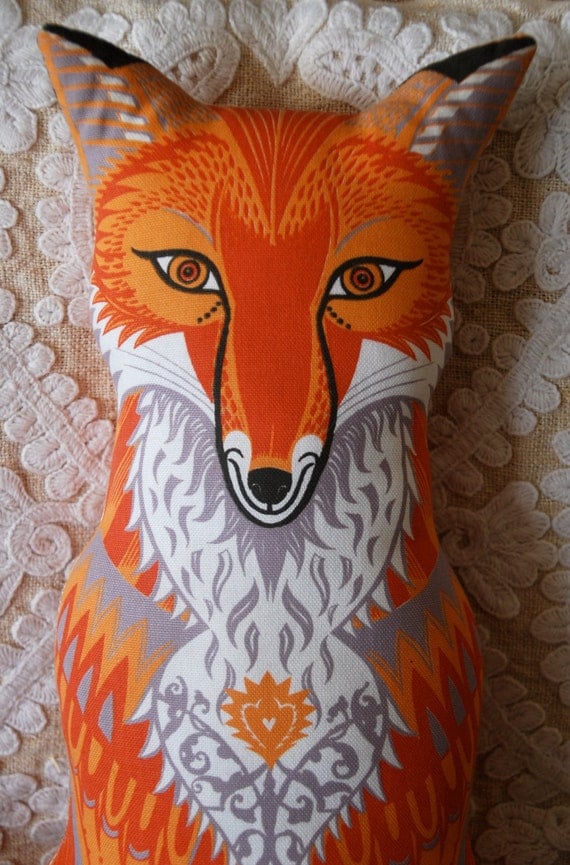 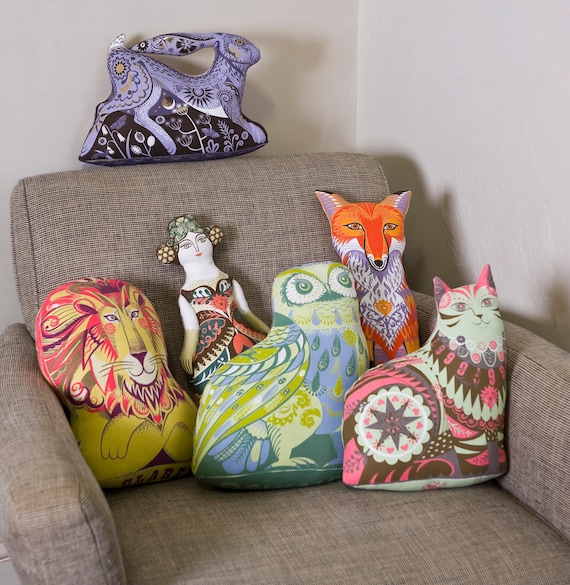 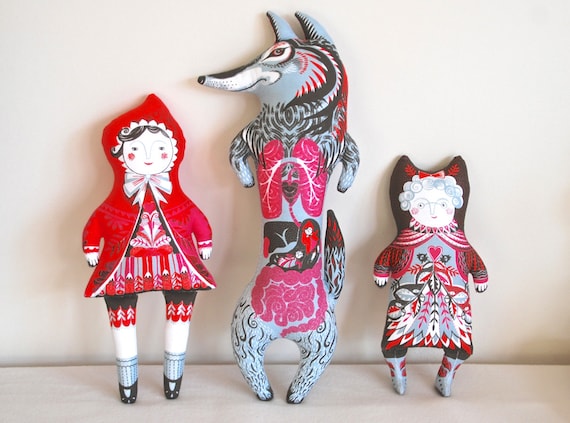 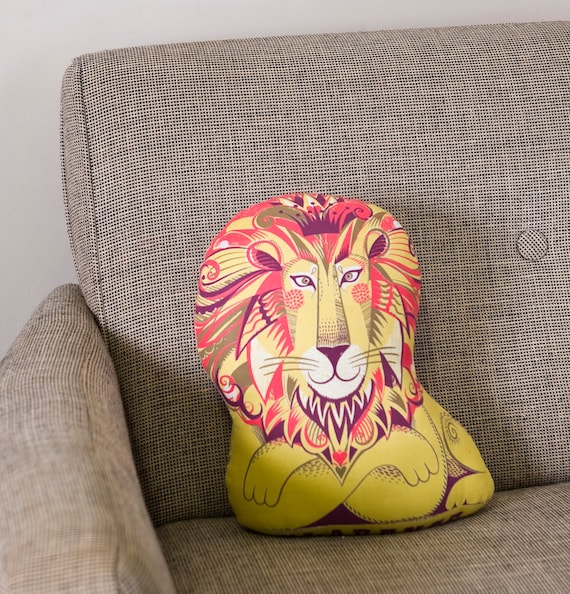 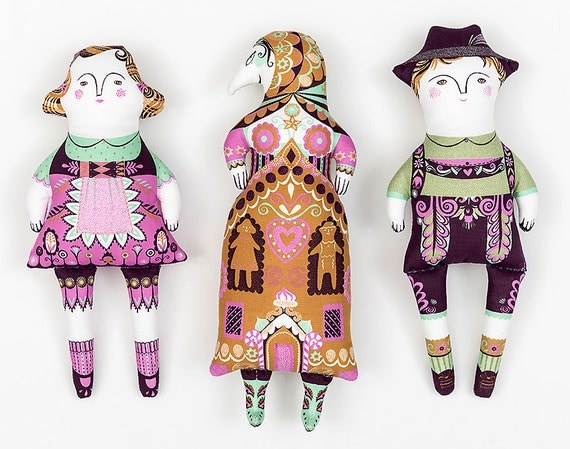 Blame it on the X-Files episodes I’ve been rewatching, but I love me some Bigfoot lately. Even before I went down the rabbit hole with Mulder and Scully, though, I actually purchased this set of paper dolls from Dubrovskya last year. I am in love with their funny expressions and gangly bodies, and it inspired me to put together a few other Bigfoot/Sasquatch/Yeti-inspired goodies, for all those who can relate to the too-big, too-weird, rather-hide-out-alone-in-the-forest-for-a-bit that’s in all of us. 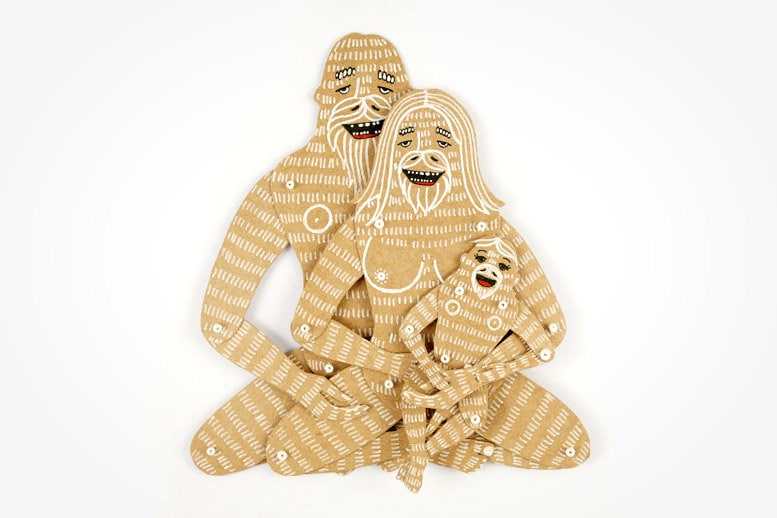 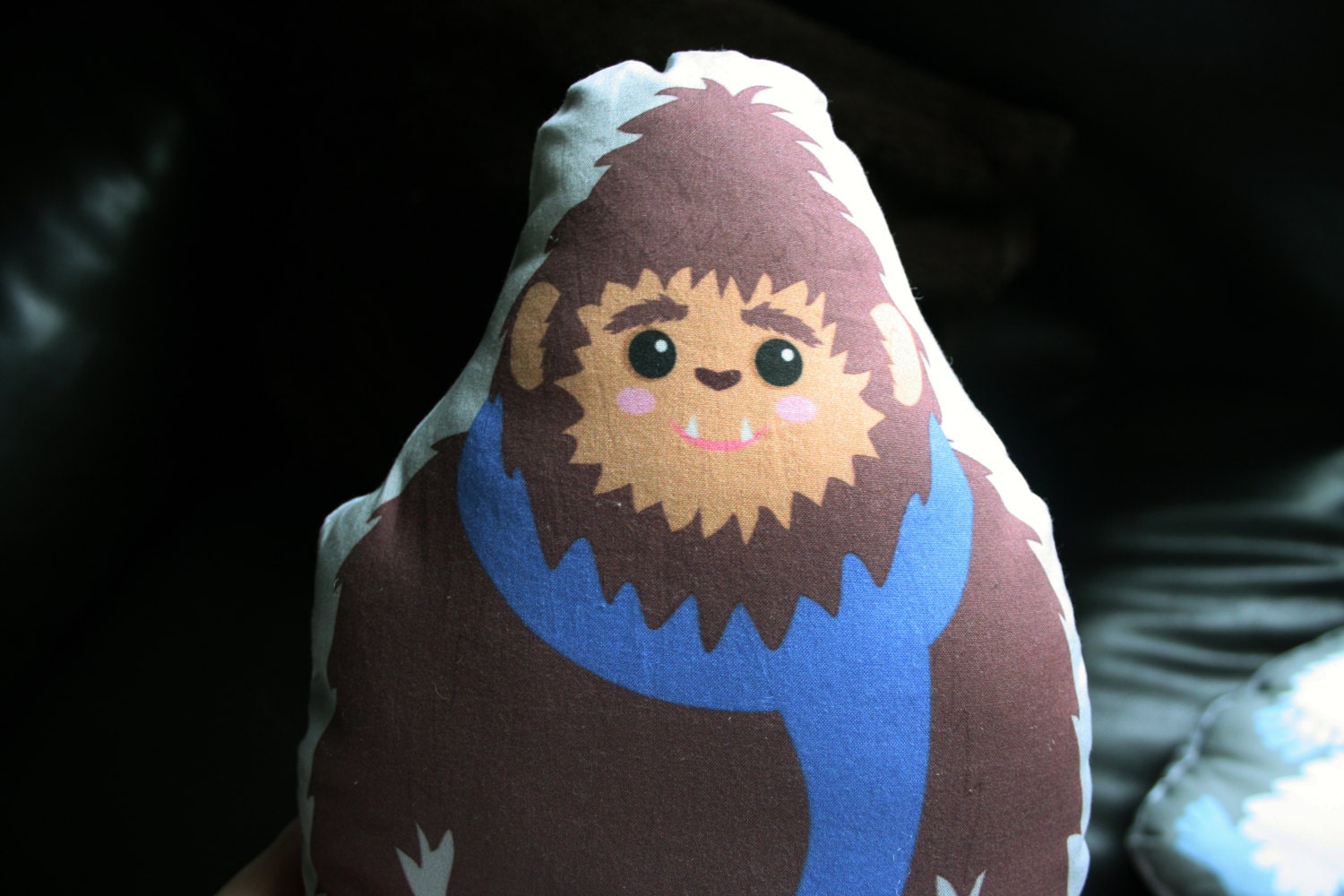 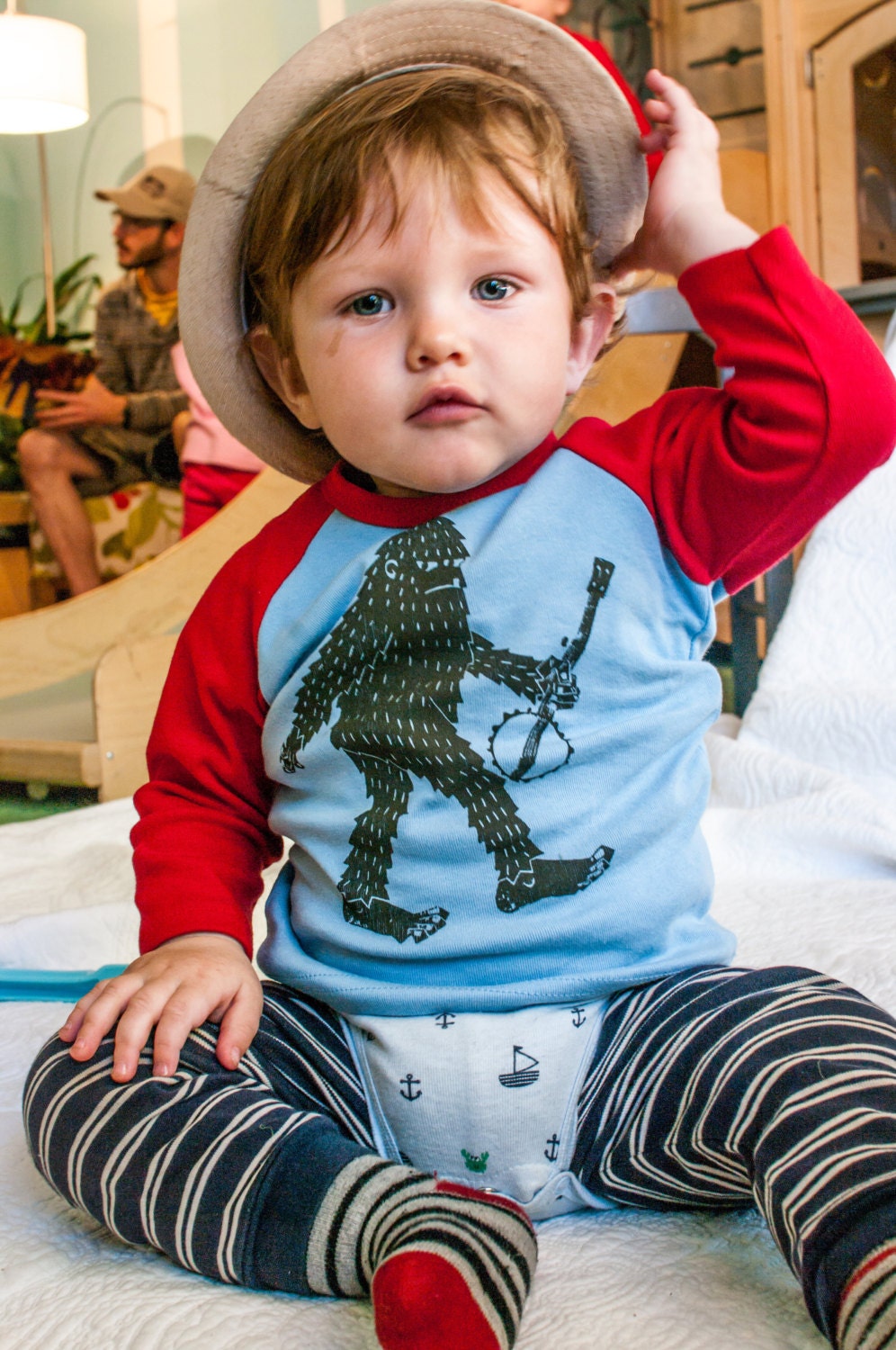 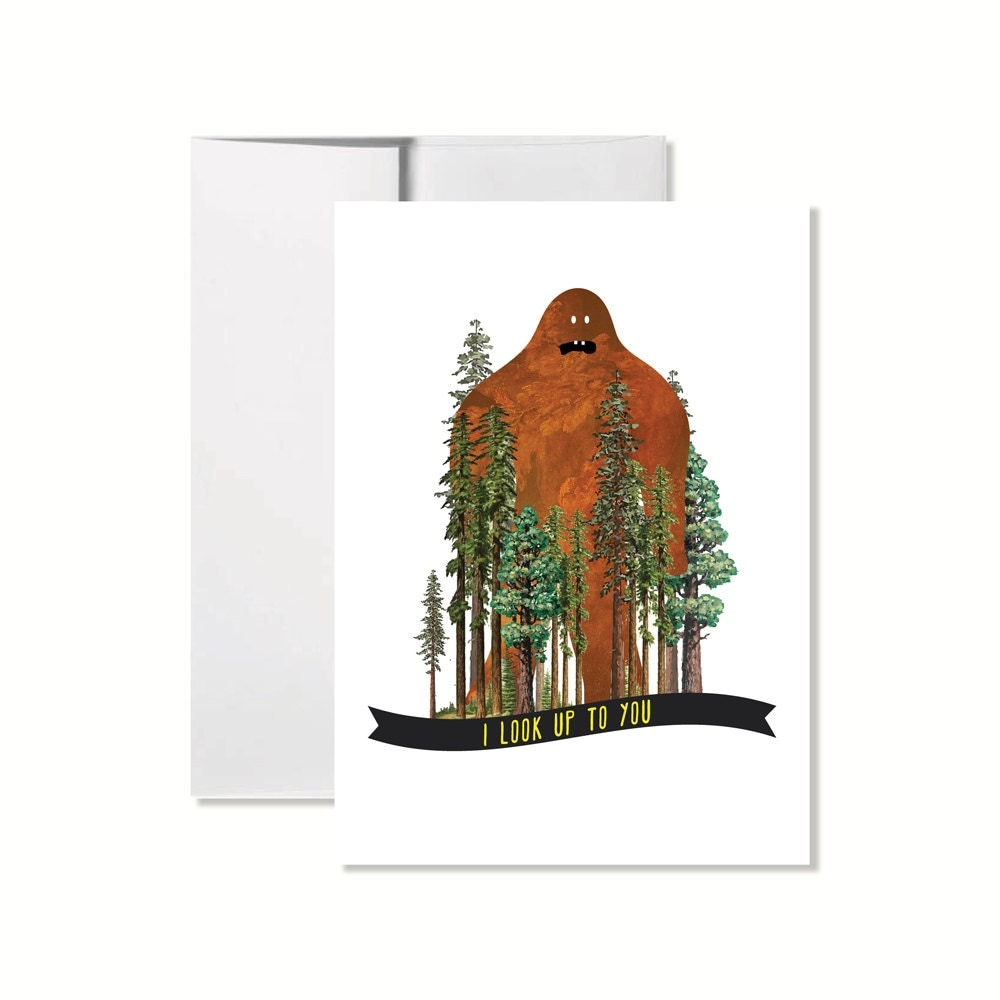 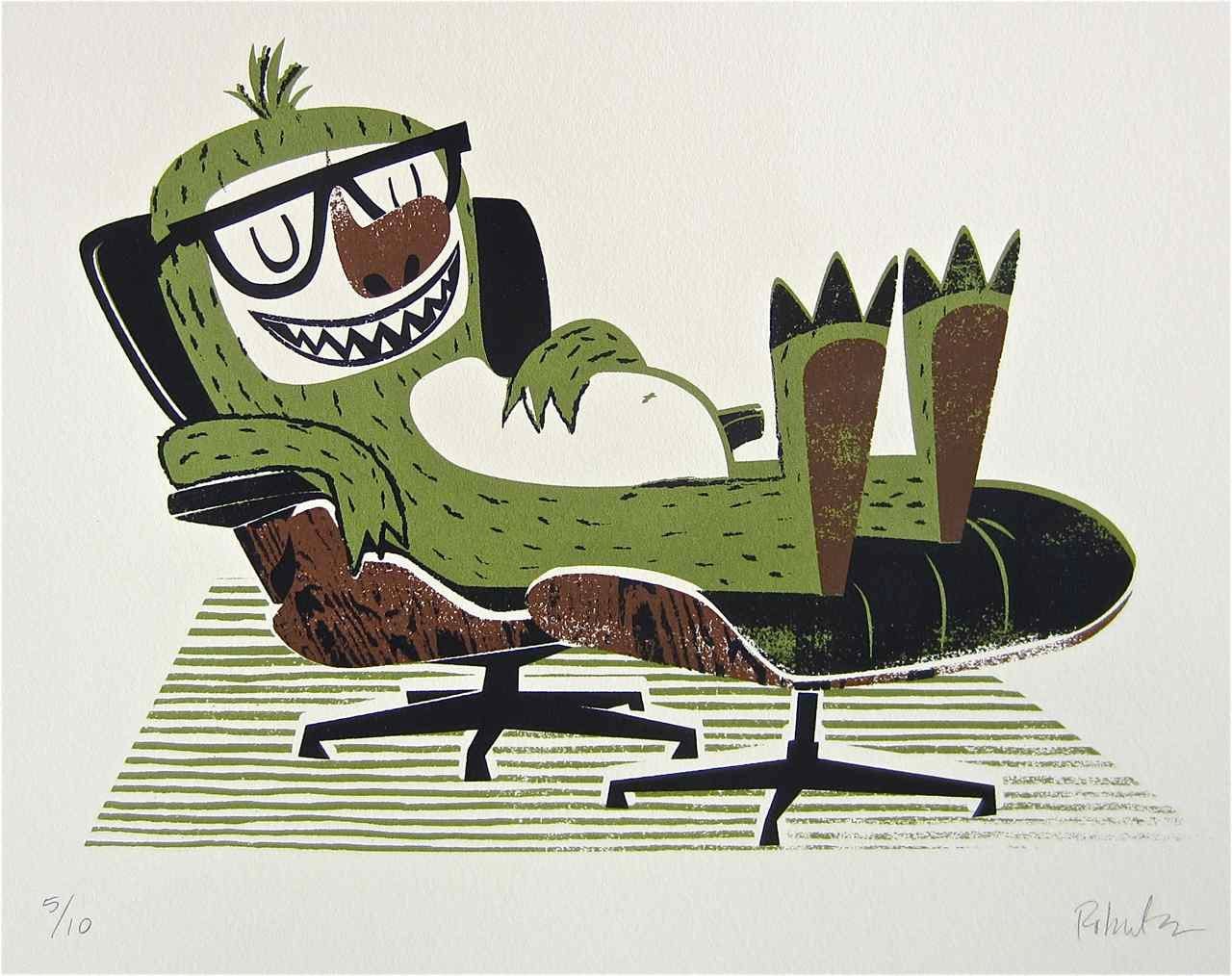 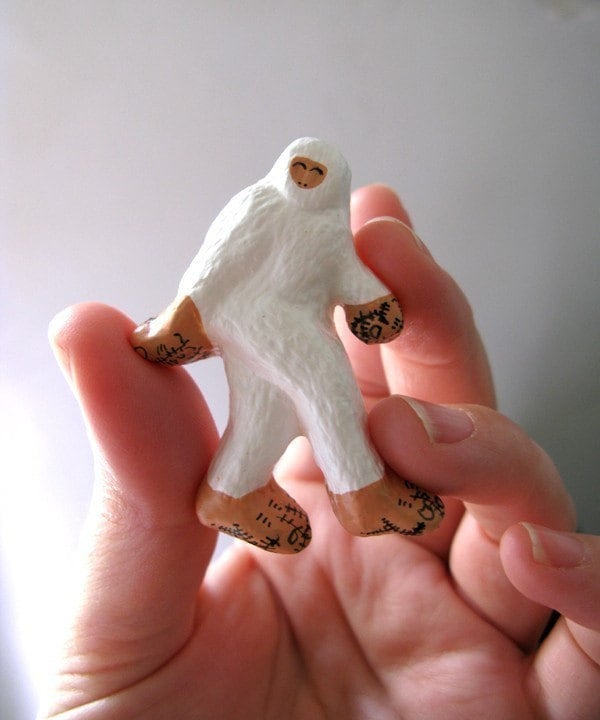 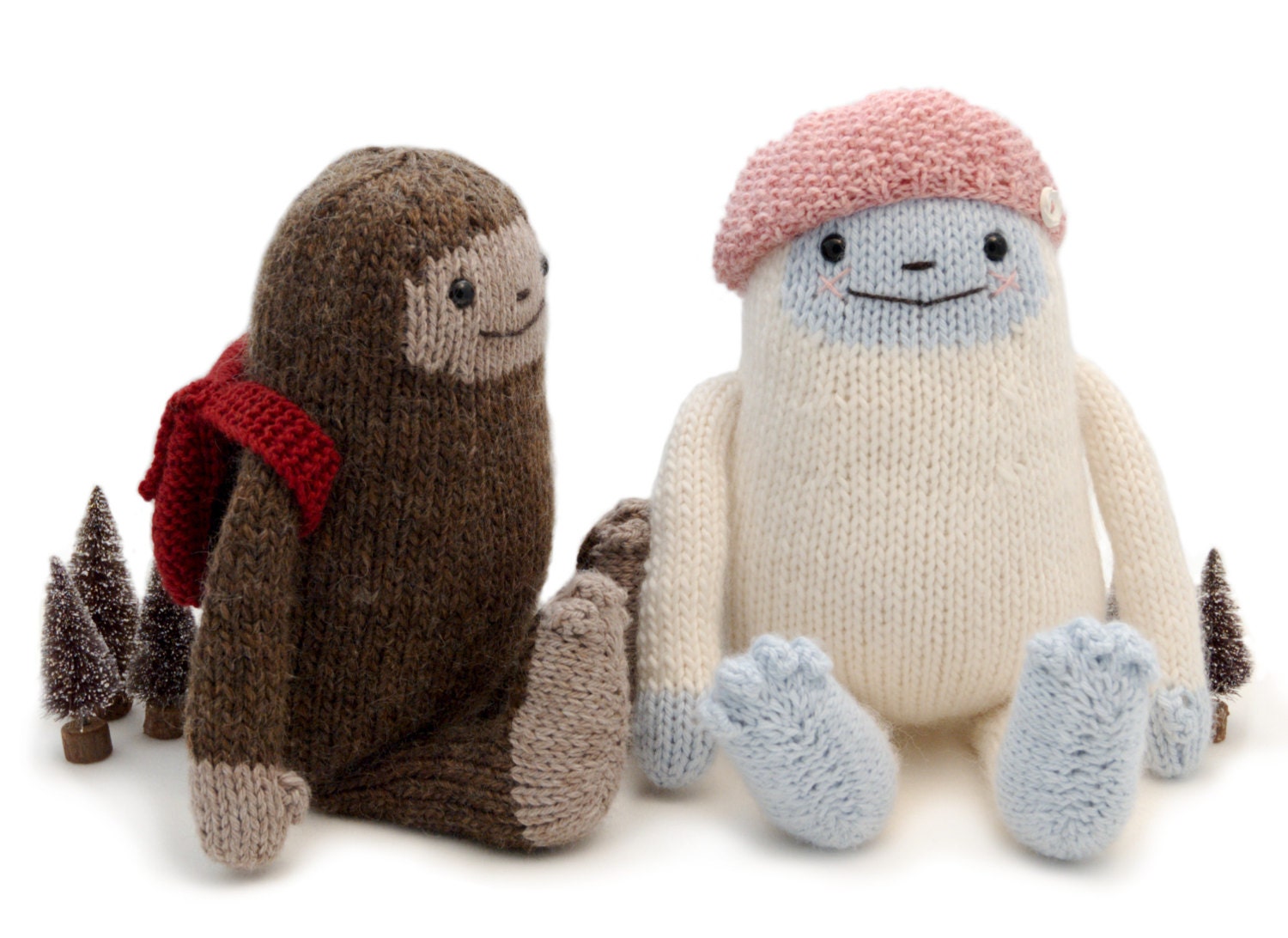 Just about the time I finally get it into my head that summer is hear, it’s mid-August and the back to school sales are upon us. Where does the season go? Besides buying cheap crayons, here’s a bit of what I’ve been up to lately.

Hello friends! I started a new day job this week (!!) and while this is an awesome change for me, it also means that outside the hours of 9-5, my mind is currently mush. So, in leiu of a brilliant blog post idea for today, here are five happy images I found this week on Pinterest. Enjoy!