In honor of Valentine’s Day, I decided to make a little tribute to the creatures who know unconditional love better than just about anyone else: dogs. I created this set of six printable Valentines based on my life as as the human to two slobbery canines. Big thanks to my dopey foxhound, Ivy, model for the hound at the bottom right, and the inspiration for the top right troublemaker, our scruffy mutt Murf, who lived up to his illustration just this afternoon by spreading trash all over the house. Good thing they’re cute!

It’s well documented that I’m a sucker for a cute dog story, so the Find Momo series is right up my alley. Momo the border collie is the star of an Instagram series taking by his human, Andrew Knapp. Momo appears in each seemly empty photo, but you’ve gotten be eagle-eyed to spot him. Try your hand at spotting him–

(Okay, so he’s pretty easy to spot in this last one.)

If you follow this blog at all, you’re probably well-acquainted with our pup, Weebay. We adopted her almost four years ago from the Anti-Cruelty Society here in Chicago and ever since the day we met her in that noisy shelter and she immediately jumped up in my lap and curled into a content little ball, I was in love.

We took Weebay into the emergency vet on Wednesday night for what we thought was a stomachache (or another urinary tract infection, which we’d been dealing with on and off since August) but her high fever prompted the vets to keep her overnight and when they called a few hours into her stay, it was to tell us that an x-ray had revealed a baseball-sized mass near her bladder. Weebay ended up in the hospital for the next three days and had surgery on Friday afternoon to remove her kidney and biopsy the other growths that are in her belly and were not able to be removed.

From what we’re know so far, Weebay’s cancer is not curable. Without the surgery she would’ve only lasted a few more days and after such an out-of-the-blue diagnosis, letting her go without a fight wasn’t something we were willing to imagine. So today we’re in some serious debt, but we have a bit more time with our sweet pup.

We started an Indiegogo campaign for anyone who has a few extra bucks they’d like to put towards Weebay’s treatments, and there are a whole bunch of perks available including Weebay the Dog Fan Club buttons, Weebay finger puppets (of course), and a playdate with the dog herself. We know that there are a lot of people who were fans of Weebay in good times, and I have no doubt that there are even more folks rooting for her now. If you have a few bucks you can spare to support her cause, we would be eternally grateful. But more importantly, we’re hoping to build up a whole fan club’s worth of good thoughts to send her way as we take on this fight.

We’ll find out more in the next few days that’ll give us an idea of how long we can hope to continue to have Weebay around. After the very real possibility that she wouldn’t make it home from the vet last week, the idea of having any more time with her feels like such an amazing gift that I can’t even feel regret that it won’t be the many, many years I’d been planning on. Weebay is home now and recovering from her surgery and every time she can manage a tail wag, every time she manages to get her sore, little body up to go for a quick walk, every time she licks my hand or catches Henry’s eye and makes him giggle, I can feel nothing but gratitude that we have her home for now, for a little longer.

You probably already know I have a soft spot for dogs in sweaters. It’s my weakness. Hence my love for this print from Martyna Zoltaszek.

Maddie on Things. Because what’s funnier than a dog doing silly stuff?

Cowboy dog on what would surely become my new favorite plate:

By Meyer Lavigne, via Domestica.

Your dose of funny dogs for the day: “Portraits of dogs shaking off water.” Enjoy! 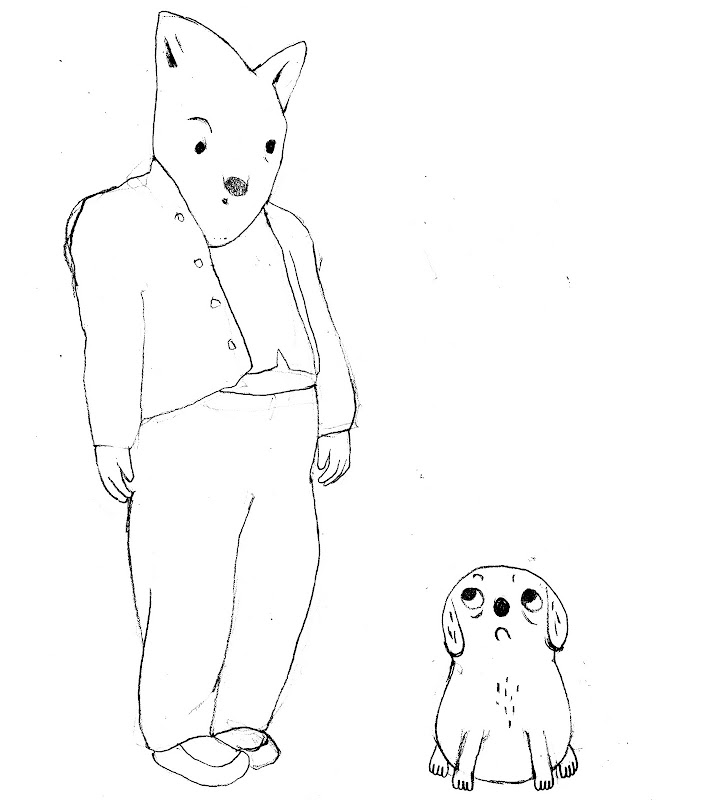 I’ve written before about my love for Camilla Engman’s adorable dog Morran. As some of you may know, Morran was diagnosed with cancer a few months back, and Engman’s yearly calendar (available here) for 2012 is dedicated to her beloved pup. She is also currently hosting an open call for entries for a picture book devoted entirely to her dog. All you have to do to be considered for the collection is send Morran-inspired artwork to info(at)studiomorran(dot)com by October 31. A jury will select the works that get published, and all submissions will eventually be displayed on a Morran-centric website. See all the details here.

Need some inspiration to create a Morran-inspired masterpiece? Check out Engman’s adorable catalog of her sweet companion here.

Here’s to a perfect Sunday morning spent with comfy blankets and a furry friend. Via dabito.

(P.S. It’s almost hard to believe this isn’t a photo of my Weebay, isn’t it? Gotta love those red, pointy-eared chihuahua mixes.)