Inspired by the Top Nine lists everyone’s been posting on Instagram this week, I decided to take a look back at some of my favorite moments from 2015. Instead of going on just people’s likes on the photos I posted (which, let’s be honest, tended to be an indicator of how well I hashtagged), I created a collage of the personal and professional moments that’ll stick with me most over the past twelve months.

There you have it–my 2015 in a nine-part nutshell! I’ve said it before, but I’ll say it again: thank you to you–my readers, customers, and friends–for coming along on this journey, reading what I have to say, and being interested in my finds. I hope 2015 was good to you, and wish for a brighter and kinder 2016 for us all.

Life is crazy at the moment, but I’m counting the days until holiday orders are out and presents are all purchased. If that ever happens, I’ve got big plans to actually decorate for Christmas, and make and cover the house with festive garlands. Till then (or just in case it never happens), I’m coveting these.

It’s that time of year again! The holidays are upon us– or getting there, at least– and seasonal products are available now in my shop! 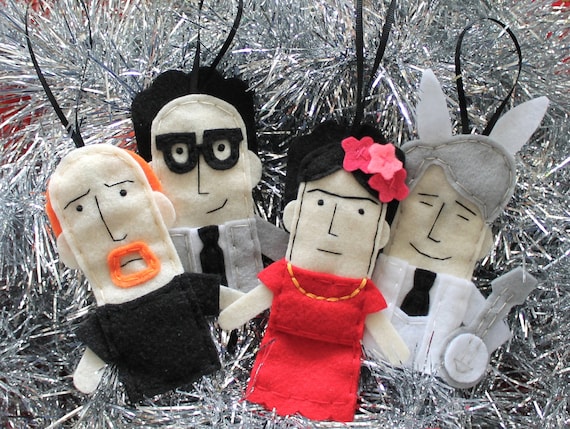 Any finger puppet you’ve had your eye on is available as an ornament, for the perfect bit of fandom for any tree. How about a Ruth Bader Ginsburg ornament for the law student in your life, Frida Kahlo for your favorite budding surrealist, or Steve Martin going wild and crazy on the tree for years to come. 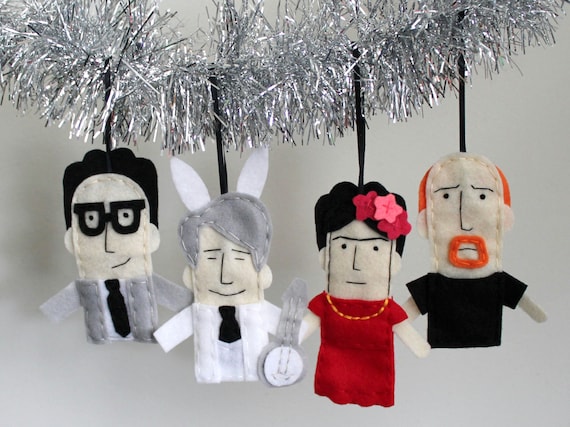 Back in the shop is also old favorites– felt state ornaments and Ralphie from A Christmas Story (“You’ll shoot your eye out!”).

Unless you happen to be one of those weirdos who has all their shopping done by November, there’s an excellent chance you’ve got somebody on your list who could use a finger puppet or ornament to make their life complete. So get on it! ; )

Happy Halloween, boys and ghouls! Hope you enjoy your weekend of haunts. Without further adieu, my annual round-up of weirdo Halloween images from bygone eras. 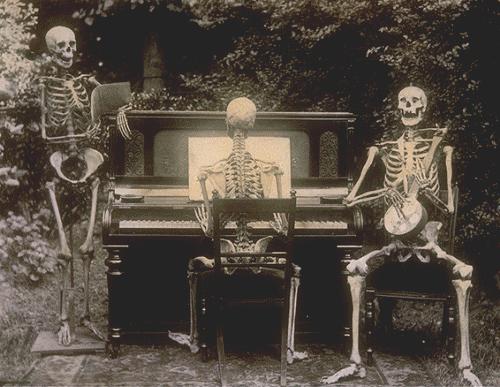 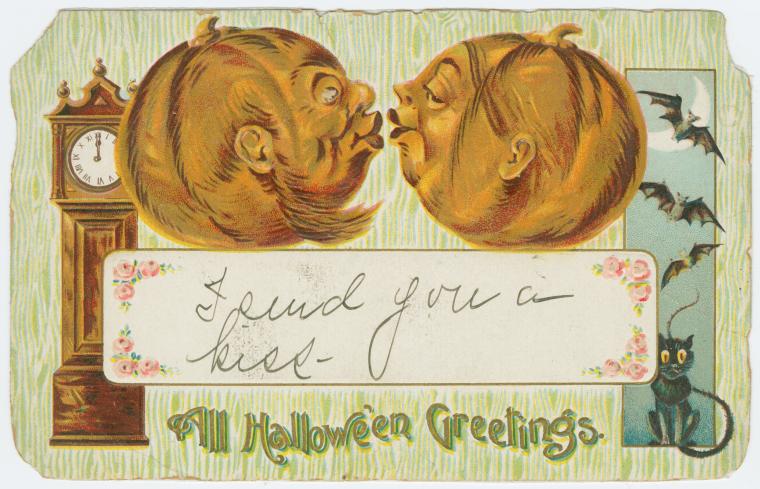 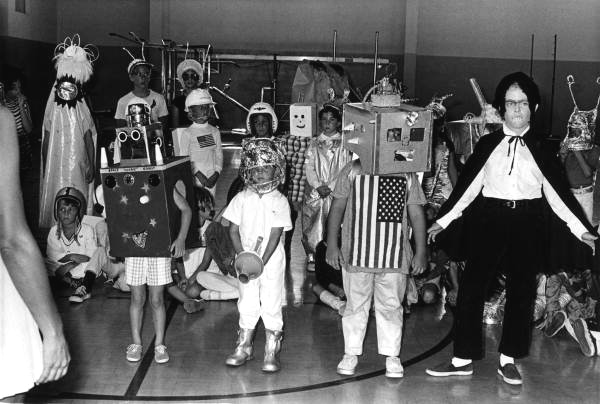 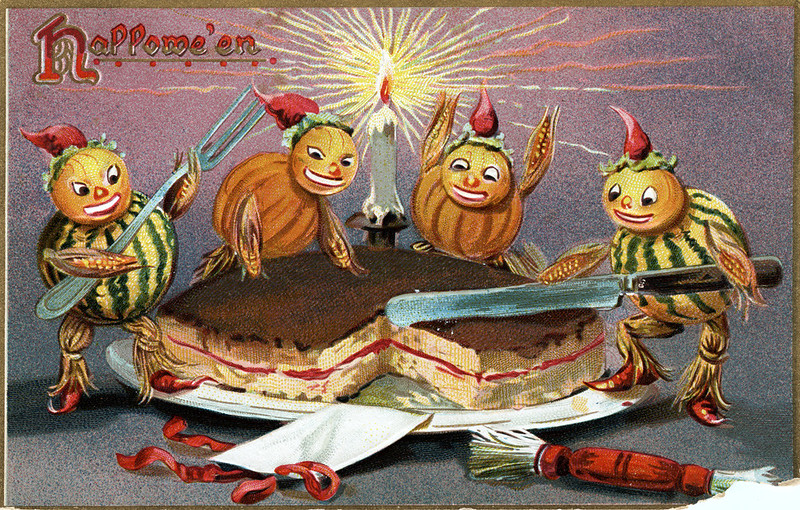 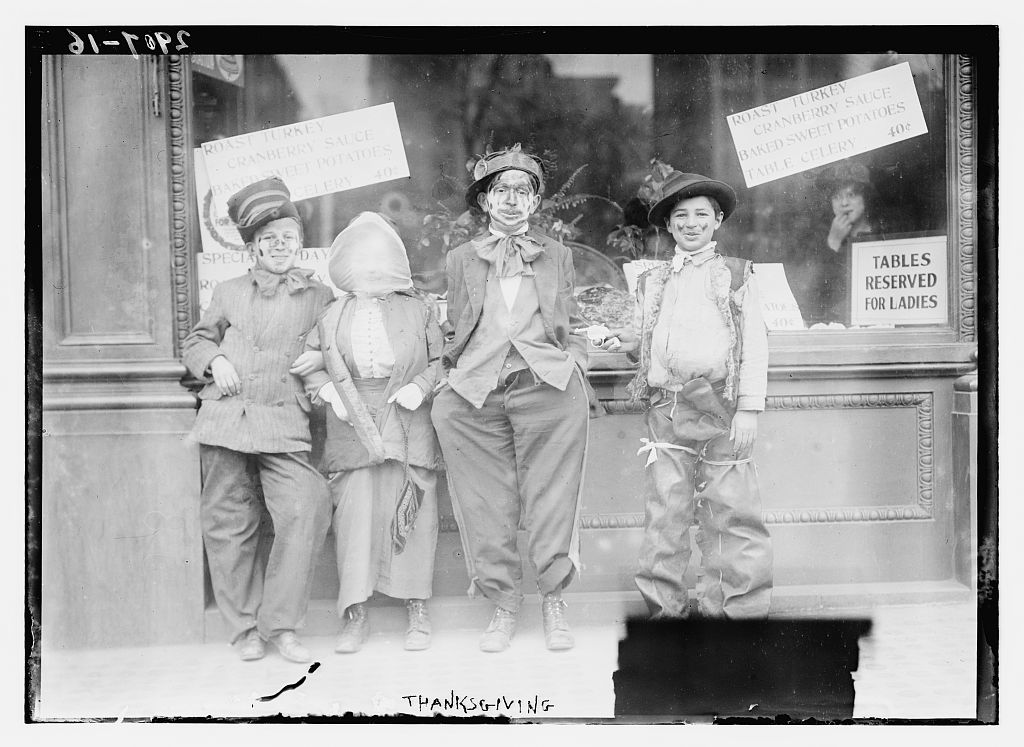 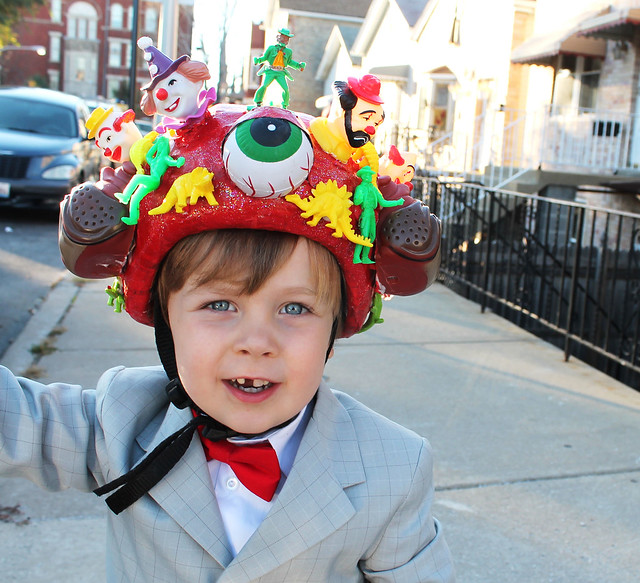 Henry and I started watching Pee Wee’s Playhouse together a year or so ago. It has honestly been a dream come true for me that he loves the show as much as I did when I was a kid (and, heck, still do). When I was a kid, I never wanted the show to end. I distinctly remember feeling so bummed out when the credits started to roll; thirty minutes was no where near enough time to examine every intricately-designed and decorated corner of the space, or stare intently at the puppets, trying to figure out how they were made. Now that the show has been re-released, the picture quality is astonishing. There are so many new details to take in, now in their fully-realized, HD glory. It’s a feast for the eyes, and the show itself totally holds up as well.

When Henry decided on his Pee Wee costume a few months back, I wasn’t totally sure it would stick. Three year olds aren’t exactly known for keeping their word. I’d check in with him every few weeks just to make sure he was still on board, and since he wasn’t wavering, I decided back in September that it was time to get to work. Since Henry’s blond hair is clearly not very reminiscent of Pee Wee, my mind went to the crazy helmet that he wears at the end of each episode of the show. Just like last year, the costume hinged on some crazy headwear to make it complete.

After a lot of research and a lot of searching (this thread was particularly helpful), I eventually collected most of the toys needed for the helmet– giant eyeball, squeaky bulldogs, dinosaurs, cowboys, clown heads. I decided against the flame stickers only because the helmet was already pretty full. Besides the helmet, the rest of the costume was thankfully pretty easy by comparison: The same gray “robot pants” Hen wore last Halloween, a vintage gray jacket on Ebay, white Tom’s knock-off shoes, red bowtie.

Henry had a bike helmet that he’d almost outgrown that we decided would be a good base for his headpiece. Though it was already red, I thought that trying to glue toys onto the slick surface probably wouldn’t work very well, so step one was covering the top in papier mache.

From there, I painted a few coats of red paint and started gluing. Gorilla Glue is great for sticking weird things like this together, but because it takes a while to cure, I had to rig up an elaborate web of tape to keep everything in place. And since that stuff puffs up like crazy, there was a fair amount of chipping away at the extra glue afterwards, too.

Next was another layer of papier mache to make the eyelid, and then a few coats of paint to touch everything up and hide any extra glue. The final step was then covering the whole dang thing in glitter– a bottle of clear sparkle paint left over from the mural I painted for my niece 15 years ago. Sometimes being a packrat pays off! 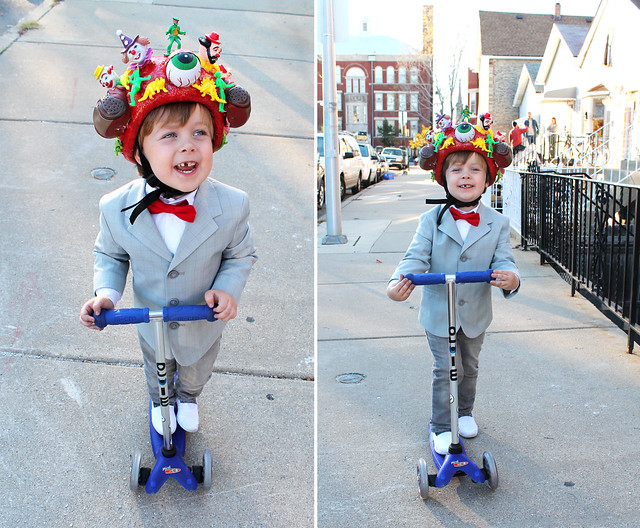 The final product is everything I could’ve hoped for. With the kiddo suited up and on his scooter, it was pretty much unmistakable who he’s supposed to be. (It helps that he’ll sing you the “Connect the Dots” song at the drop of a hat, too.) We tried out his costume over the weekend at a local kiddie Halloween parade and only lost one dinosaur over the course of the evening. I consider that a success!

Update: By popular request, here are the sources where I found the toys used to construct Henry’s/Pee Wee’s helmet, along with tips for how I used them:

Eyeball: The real helmet looks to have a Mad Ball, but they’re now collector’s items and the real ones are hella expensive on Ebay. Instead, I found a foam squeeze toy that was a pretty close approximation, if a little smaller than I’d hoped. The one I bought (on Ebay) was similar to these.
Plastic Dinosaurs: Lots of dinos are easy to find on Ebay as well. I went with monochrome ones to keep it simple (ha!).
Clown Heads: These were on of the trickiest pieces to research, and I was never able to find clown heads that were flat. I think I did come upon something very close to the original at one point, but knew I didn’t have tools that would let me saw through the hard plastic. Instead I went with a 4-pack of cake topper clowns.
Bulldogs: The bulldogs on Pee Wee’s helmet appear to be hard plastic. The closest replica I could find were soft squeaky toys. I cut them down the middle with an x-acto knife and removed the squeaker. Because they’re not rigid, these were tricky to glue down, so I filled them with newspaper that I adhered with tape, then glued that down on the bottom with more glue around the edge.
Cowboys & Indians: Lots of these available on Ebay and Etsy. I went with a bulk lot of about a dozen that were all different because I liked the variety. (I also x-acto-ed off all the guns and threw away the extra racist ones, to keep it 3-year-old appropriate.)
Birds: I searched and searched for ducks like those featured on Pee Wee’s actual helmet. Alas, they were no where on the internet, as far as I could tell. Instead I went with balancing birds, cut in half with the magnet removed. They’re easy to find online, too.

There you have it– a Pee Wee helmet recipe. Or as close as you can get to one, anyway. Good luck!

A bit of red and blue to celebrate a certain country’s birthday this week. Happy fourth, all! 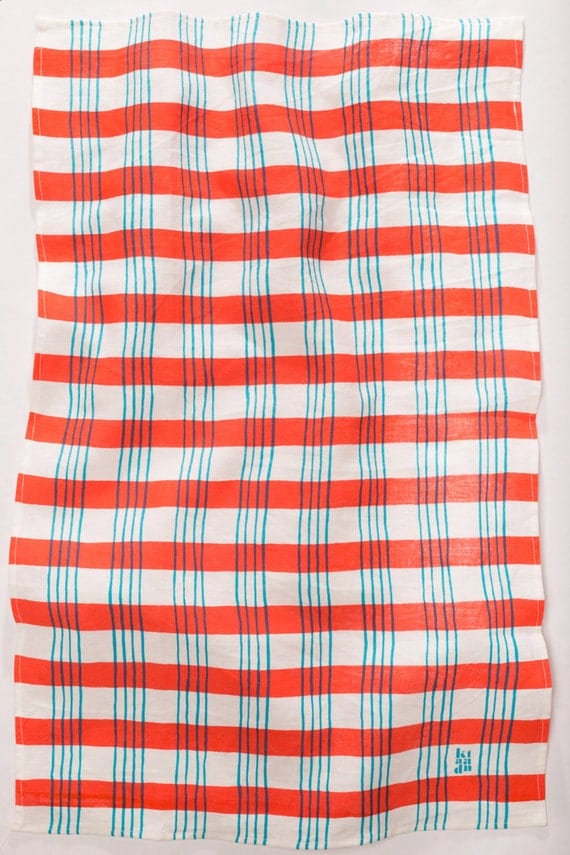 I’m slowly getting back into the swing of life post-holidays. While I didn’t intend to take a hiatus from blogging, it was the by-product of three family Christmases and two road trips in just 10 days or so, not to mention the blur of buying gifts, opening gifts (okay, mostly watching the kid open gifts), deciding whether it was warm enough to not wear a coat, then freezing our butts off, looking at Christmas lights, eating various kinds of potatoes and cookies, etc etc etc. Oh, and six movies in three weeks– probably a new personal record. Here are some of the other highlights: 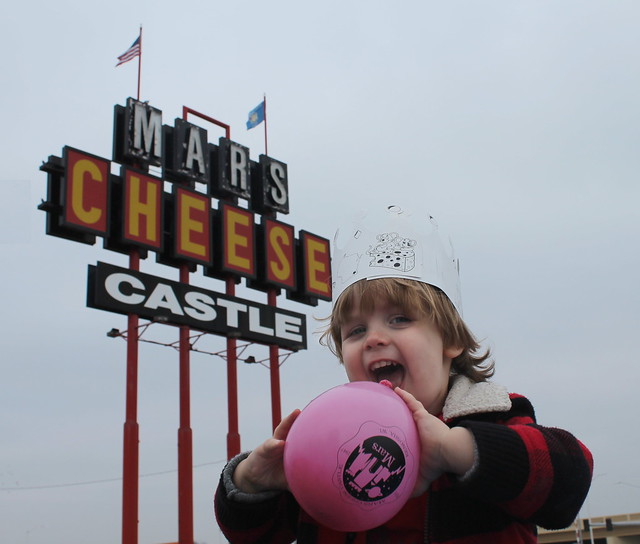 First up, our annual pre-Christmas cheese pimgrimage to Wisconsin.

Christmas morning involved bubbled wrap (not surprisingly, the kid was more interested in it than the actual present), and an unimpressed dog.

Nieces found my camera at Christmas and left these choice selfies for me to discover later. 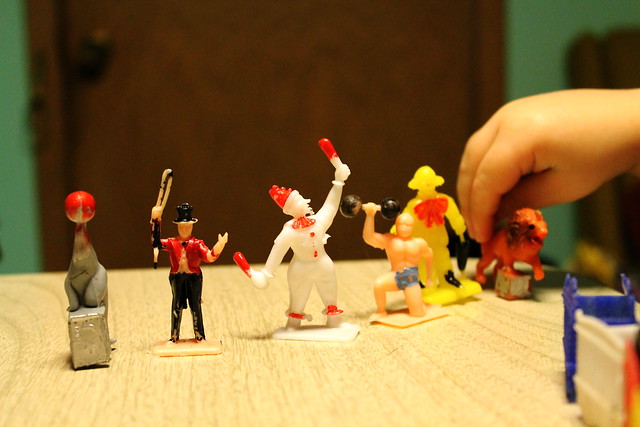 We got these vintage circus cake toppers a few months back, but I let Henry play with them at Christmas for the first time and he was enamoured.

I don’t generally Instagram food, but when I do, it’s probably the B & B from Yats. 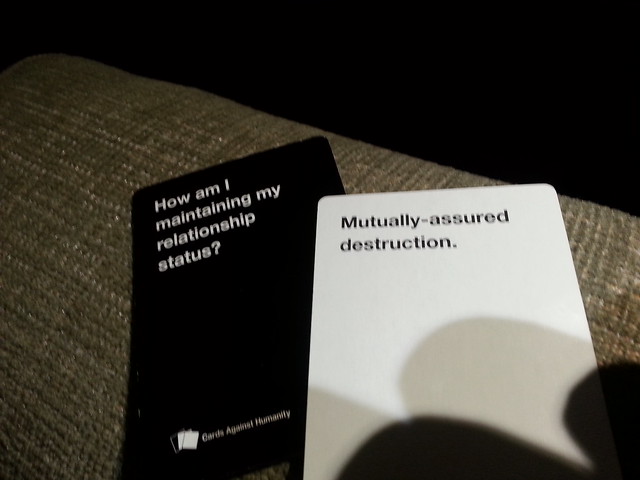 I have to say, I’m definitely a fan of a little break and reenergizing before the new year. And now that that’s done, here’s to 2015!

Let’s face it: nobody gets nice mail anymore. At our house, if it’s not a bill, it’s junk that ends up in the recycling bin eleven months out of the year. And that’s why the holidays are so great– it’s the one time of year that you can actually look forward to checking the mail. If you’re not one to send a photo card, may I suggest one of these lovelies? 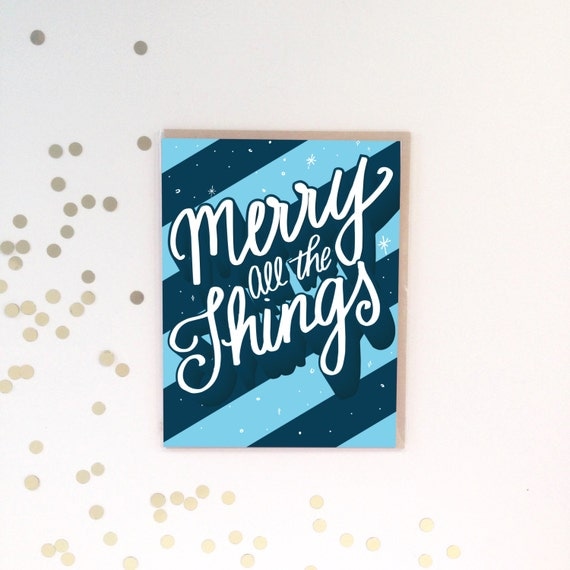 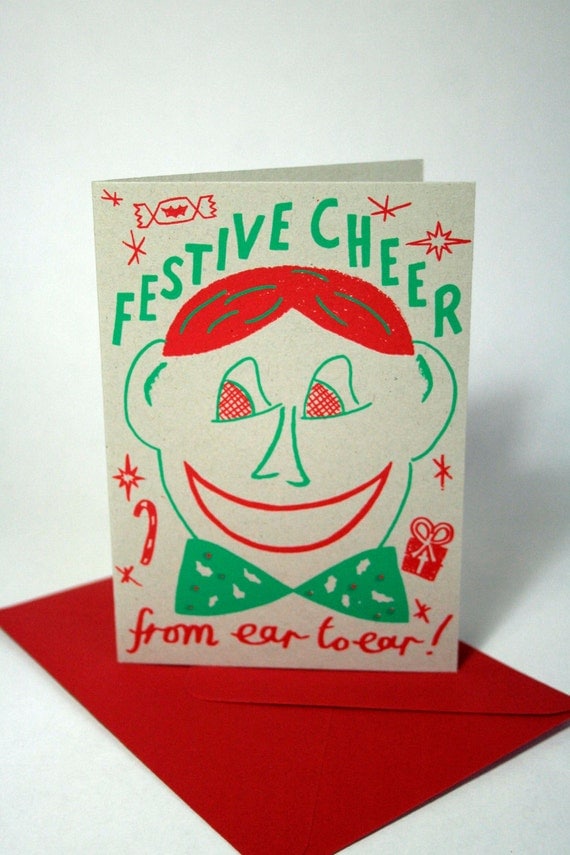 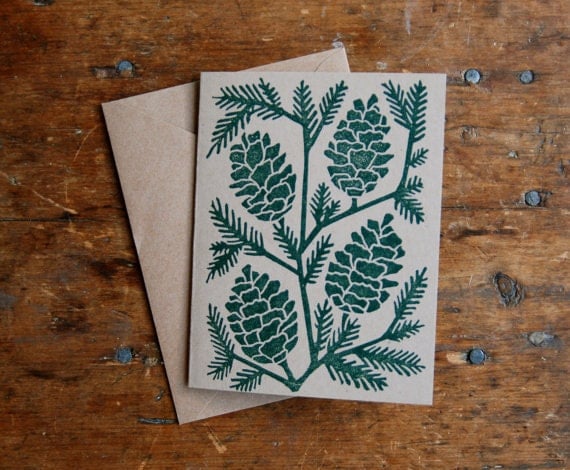 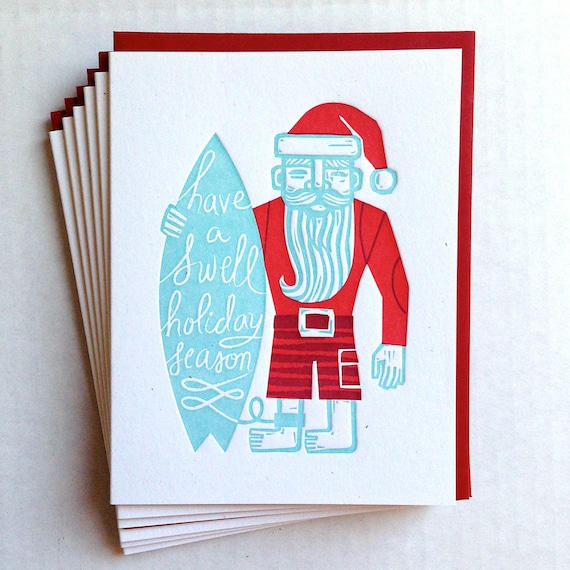 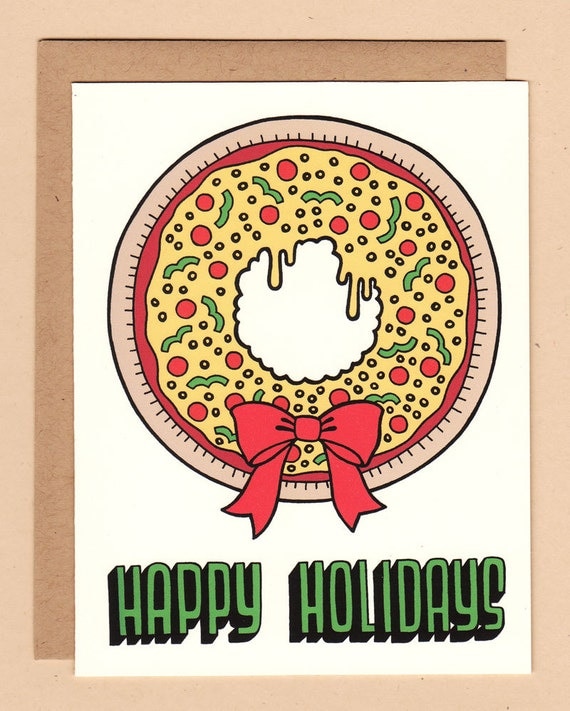 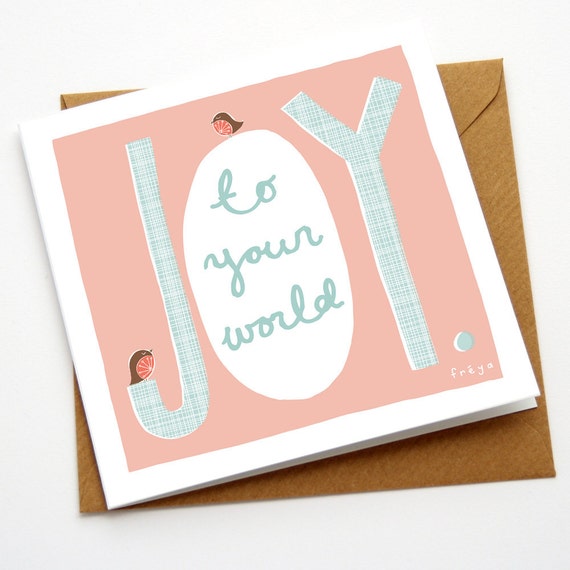 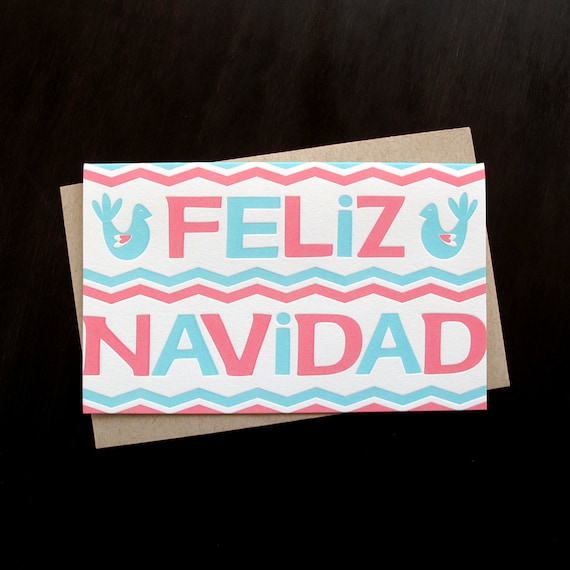 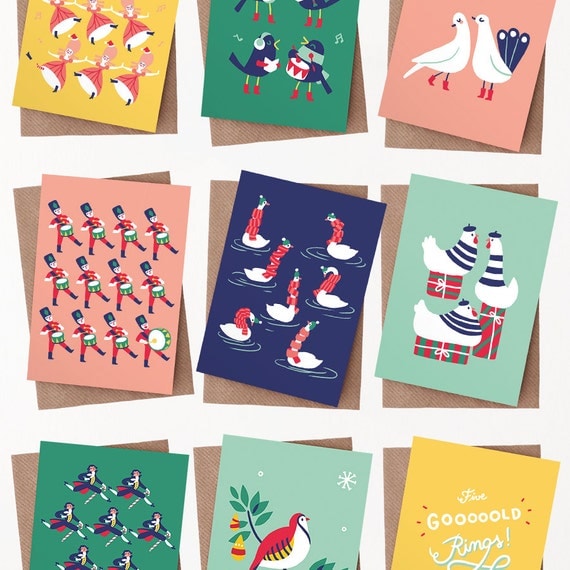 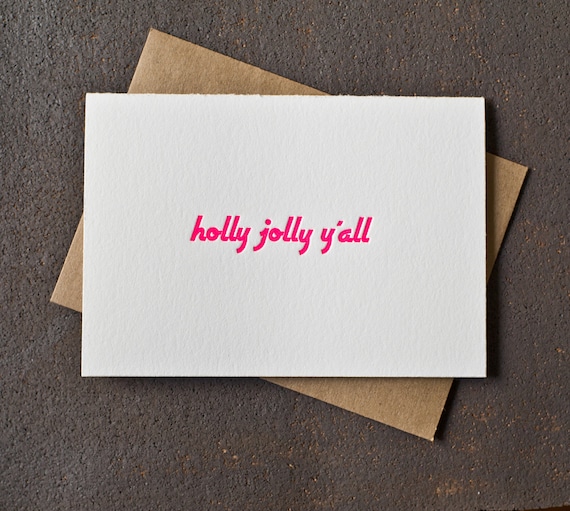 It’s two weeks before Thanksgiving, so you know what that means– time to get in the Christmas spirit!

I’m excited to finally add my Heisenberg ornament to the shop this year. I sold this design at last year’s Detroit Urban Craft Fair but never got around to listing it online. For the person who has everything, you can be sure that a little felt Heisenberg will steal the show on Christmas morning.

This year I’ve also listed a few character puppet’s individually, as well as the “choose your own” listing for any of my finger puppet characters as ornaments.

And don’t forget– my Early Bird sale runs through next weekend, so ordering sooner rather than later is recommended!

Happy Halloween, y’all! Here’s hoping that our costumes look as weird and creepy to people 40 years in the future as these do. 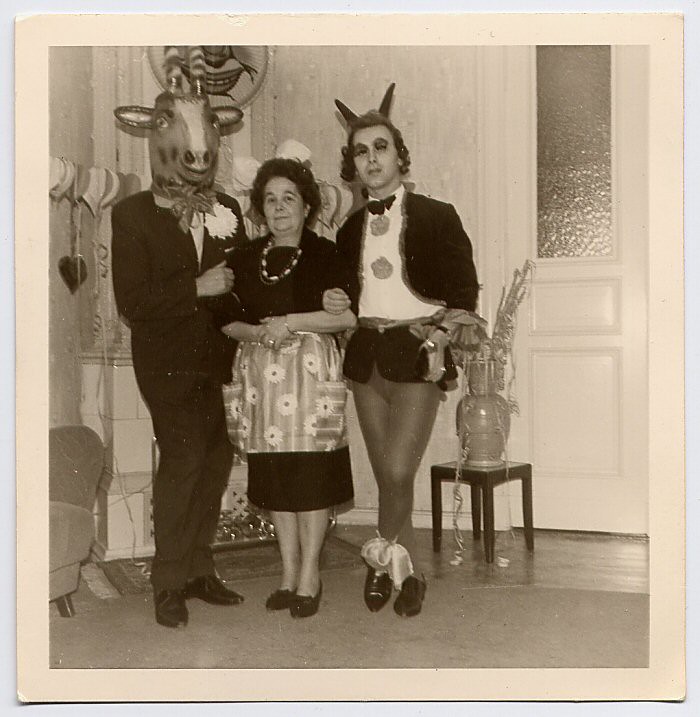 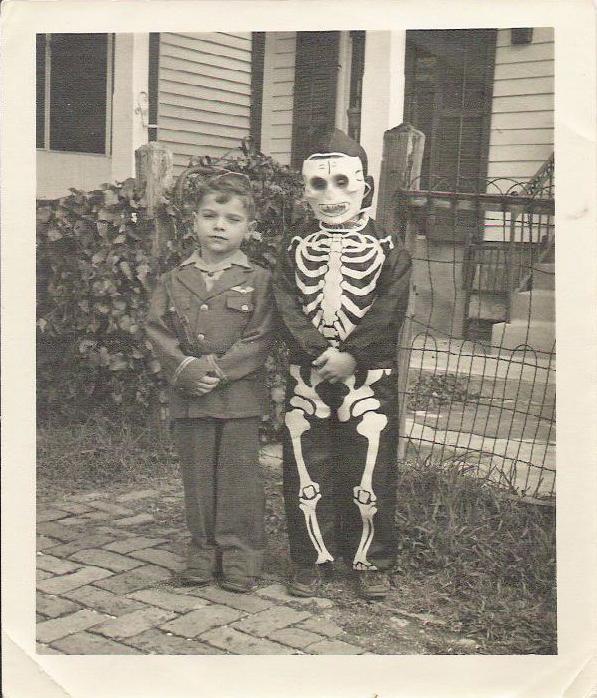 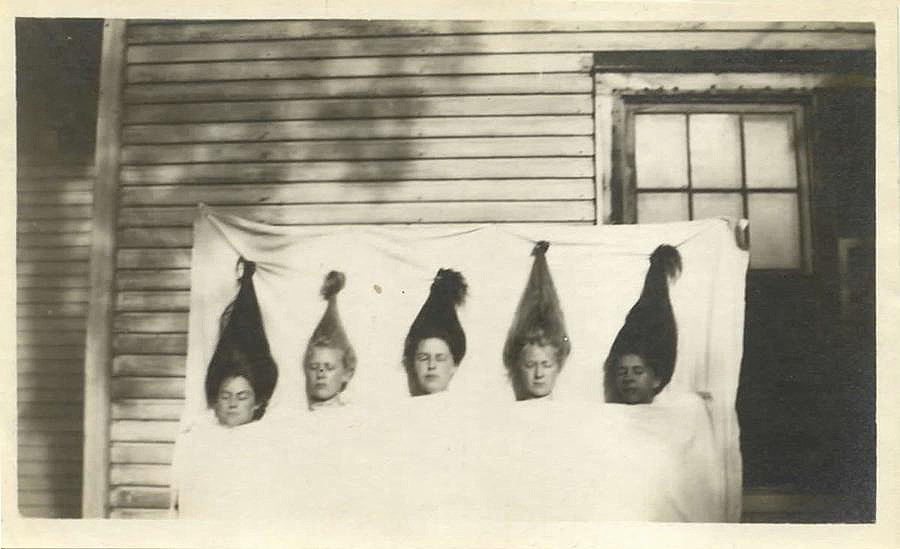 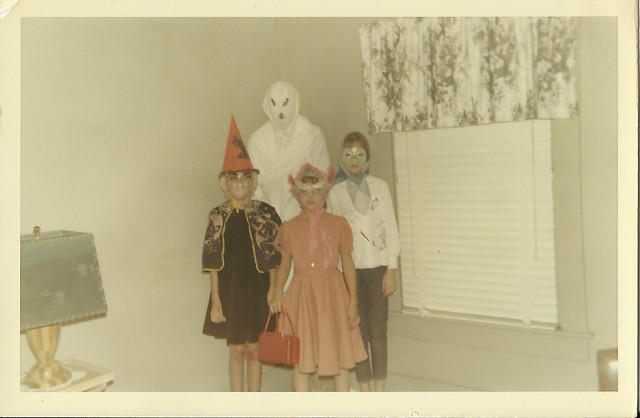