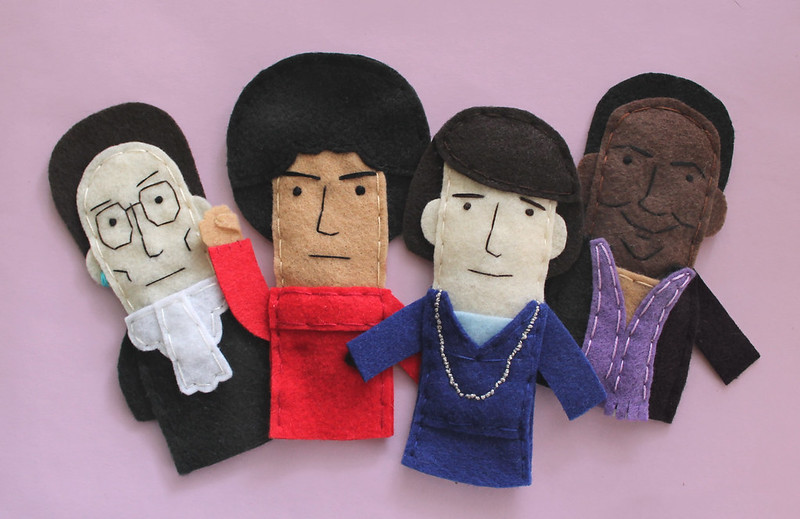 There’s a great quote by Bertolt Brecht that says that “Art is not a mirror held up to reality
but a hammer with which to shape it.” This idea has always really resonated with me in that what we create, no matter how small, is not only an expression of who we are, but also a vital part of making the world the way we want it to be. Whether painting or photography, or even a finger puppet!, the choices that an artist makes mean something because our work is inherently a message out to the rest of the world.

It’s always been important to me to create work that’s clever and fun, but given that art-making is also a opportunity to “shape the world,” I’ve also tried to feature puppet characters and people who were progressive or subversive in some way. Whether it’s a character we see take a journey no one would’ve expected at the start, one that breaks seemingly every stereotype, if I’m going to commemorate someone, it’s because I love it and I see real positive value in what that person represents.

In this spirit, I recently jumped at the chance to create a silent auction donation for Abortion Care Network‘s yearly meeting. ACN supports independent abortion providers around the country–a network that currently provides care for 2 out of 3 women in the U.S. who have abortions each year–and works to increase access and end stigma and harassment of abortion-seekers and caregivers.

My family happened to have donated to South Wind Women’s Center, part of ACN’s network, late last year, shortly before the opportunity to take part on the auction came about. Funny how things come together, huh?

Obviously this is an issue that’s been in the news in recent months, I was glad to have an opportunity to do something positive for this cause, and excited for the challenge of creating work that would appeal specifically to ACN’s members and donors. I decided that this event would be a great opportunity to celebrate some of my favorite feminist icons as puppets. It was no easy decision to narrow down the field, but I eventually chose four women: birth control pioneer Margaret Sanger (a no-brainer, given the cause), radical anti-racist and women’s right activist Angela Davis, scholar and writer bell hooks (watch this great recent clip of her and the divine Laverne Cox talking about feminism and reproductive rights), and Ruth Bader Ginsburg, my love for whom has been well-documented.

A pretty badass crew, don’t you think? Talk about #squadgoals!

Custom projects like this are always exciting, and even more so when I have an opportunity to indulge my activist side more than usual. Here’s hoping the crowd at the ACN event agrees and the set raises some money for such a great cause!

The last few weeks have been momentous– a mixture of triumph and tragedy, successes and setbacks. From Charleston to the Supreme Court ruling on gay marriage, singular moments of protest around the confederate flag and a movement that is far from finished, it’s a lot to sit with all at once. These types of ambiguities–loss, joy– are celebrated in Queer Icons, a series by photographer Gabriel García Román.

Queer Icons features powerful portraits of queer activists of color transformed into religious icons. The photo collages borrowing Catholic symbolism, royal colors and jewel tones, hand-written poems and classical patterns, and exist as a critique and protest against art history– and history in general– that so rarely features voices or images from this community. And the results are stunning.

It’s about time that Ruth Bader Ginsberg got the attention she deserves, and I’m glad to see her trending all over the internet this week. Of course, it would be way better if she’d be so talked about for writing the majority opinion on a Supreme Court ruling that actually treated women as, you know, people. But in the interim, at least folks are actually having a discussion about health care access and reproductive choice, and her excellent and important minority opinion is getting out there.

Oh, and should you like to share the RBG love, I suggest this set of greeting cards by Alisa Bobzien, all profits from which are being donated to Planned Parenthood through July 7. Heck yeah! 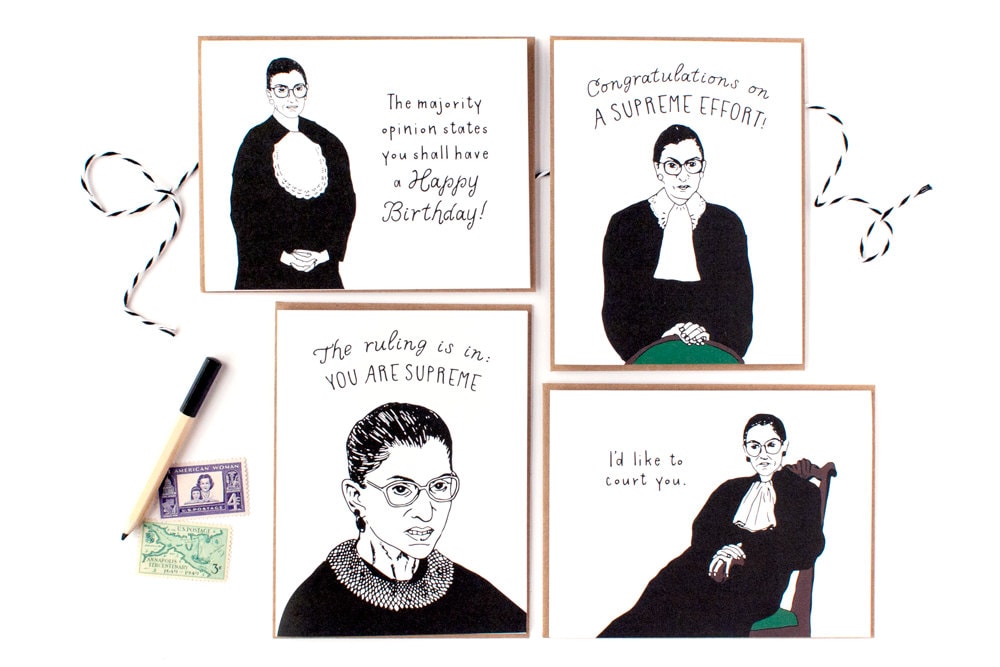 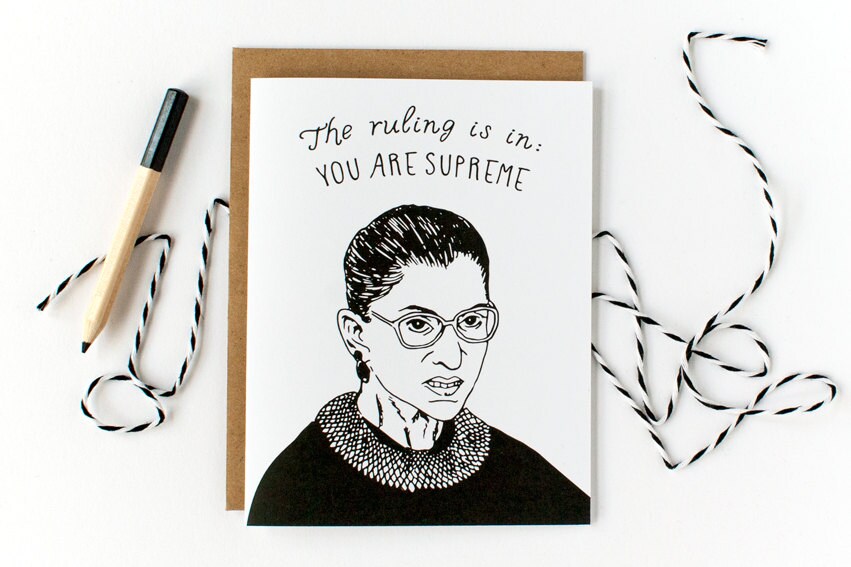 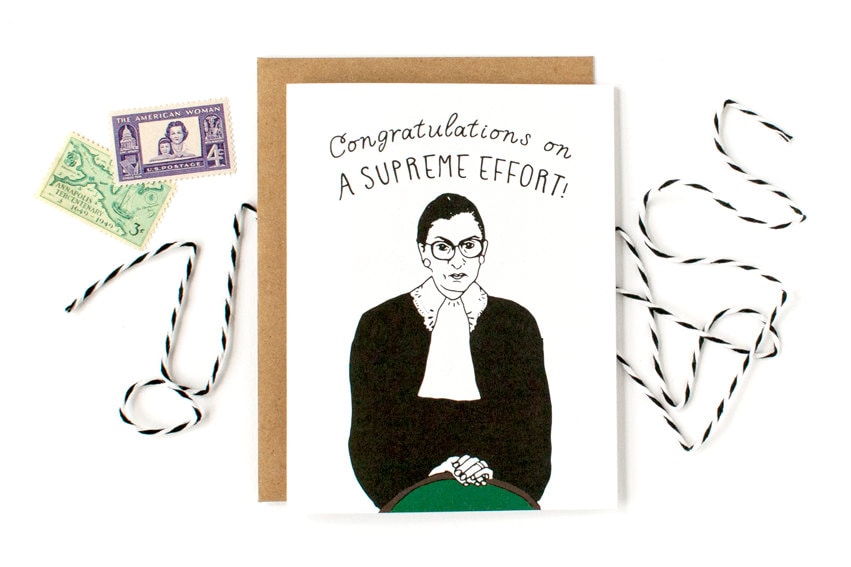 P.S. This post about RGB & mansplaining is worth a gander, too.

If you follow this blog at all, you’re probably well-acquainted with our pup, Weebay. We adopted her almost four years ago from the Anti-Cruelty Society here in Chicago and ever since the day we met her in that noisy shelter and she immediately jumped up in my lap and curled into a content little ball, I was in love.

We took Weebay into the emergency vet on Wednesday night for what we thought was a stomachache (or another urinary tract infection, which we’d been dealing with on and off since August) but her high fever prompted the vets to keep her overnight and when they called a few hours into her stay, it was to tell us that an x-ray had revealed a baseball-sized mass near her bladder. Weebay ended up in the hospital for the next three days and had surgery on Friday afternoon to remove her kidney and biopsy the other growths that are in her belly and were not able to be removed.

From what we’re know so far, Weebay’s cancer is not curable. Without the surgery she would’ve only lasted a few more days and after such an out-of-the-blue diagnosis, letting her go without a fight wasn’t something we were willing to imagine. So today we’re in some serious debt, but we have a bit more time with our sweet pup.

We started an Indiegogo campaign for anyone who has a few extra bucks they’d like to put towards Weebay’s treatments, and there are a whole bunch of perks available including Weebay the Dog Fan Club buttons, Weebay finger puppets (of course), and a playdate with the dog herself. We know that there are a lot of people who were fans of Weebay in good times, and I have no doubt that there are even more folks rooting for her now. If you have a few bucks you can spare to support her cause, we would be eternally grateful. But more importantly, we’re hoping to build up a whole fan club’s worth of good thoughts to send her way as we take on this fight.

We’ll find out more in the next few days that’ll give us an idea of how long we can hope to continue to have Weebay around. After the very real possibility that she wouldn’t make it home from the vet last week, the idea of having any more time with her feels like such an amazing gift that I can’t even feel regret that it won’t be the many, many years I’d been planning on. Weebay is home now and recovering from her surgery and every time she can manage a tail wag, every time she manages to get her sore, little body up to go for a quick walk, every time she licks my hand or catches Henry’s eye and makes him giggle, I can feel nothing but gratitude that we have her home for now, for a little longer.

Candy Chang‘s Before I Die project has been making the internet rounds the past few months. I’m such a fan of large, interactive public art works, and love how the range of responses turns what could be a really serious piece into something that’s often quite playful.

Grain is a collective of designers focused on creating sustainable, socially conscious and well-crafted items. My favorite are their whimsical and lovely jewelry selections, and the mirrors with textile-wrapped edges, but everything they offer is equally lovely.

Check out the grain for your self here.

I love the sentiment of this poster from the Art for Joplin (Missouri) project from a few months back. See all the posters from that series here.

Of Another Fashion is a sort of vintage fashion blog, one that highlights women of color, a group that, according to the blogs author, Minh-Ha T. Pham, is often absent from the studies of cultural, and fashion, history. The collection features user-submitted and professional photographs from across the 20th century and aims to give voice to women whose lives have been overlooked in popular culture and academic study. In addition to be a worthy project, the photos are also a charming look into the subjects daily lives… in addition of their amazing outfits.

That last photo is actually the blogger’s mother. Doesn’t she look wonderful?!

See all the stylish ladies here. Via NPR.

This sweet print by Chotto Omoshiroi is for sale over at Pikabooks with 100% of the proceeds going to the International Federation of the Red Cross and Red Crescent to assist with earthquake and tsunami relief in Japan. Or donate directly here. Every little bit helps.

A couple people’s blogs and twitters have posted this in the last few days, but I thought I’d add my little shout-out, too. Power and Light Press has started a Kickstarter to fund a mobile printing adventure around the country. As someone who was lucky enough to ride along a couple times on my friend Laura’s own roadtrip/business venture (see this and this), I have to say that these sort of experiences are really awesome and really worthwhile. Plus, Power and Light makes great stuff. Check out the video here–

More Photos
Create a free website or blog at WordPress.com.