To say that my brain is a bit fried right now would be, well, an understatement. So in leiu of being able to string together more than a few sentences before getting distracted, here are a few songs that are on heavy rotation in the studio, and in my head, as of late.

A close second to my undying love for The Band is my love for amazing Band covers like this one.

I’m late to the party, but totally loving The Head and the Heart recently. I admit that I love their self-titled album a bit more than the new one, but this was the song I first heard from them that pulled me in.

Everything about Jenny Lewis’ new album is amazing, but this song has got to be my favorite. So weird and lovely.

If you know me, you know I’ve forever been a sucker for a sad song, and this one is right up there with the saddest. But so beautiful and haunting.

Around here it’s been lots of Netflix watching (mostly Walking Dead reruns, I’m embarressed to admit) and lots of sewing, sewing, sewing. Nearly every free moment for the past few weeks trying to get a leg up on holiday prep. Here’s a little peek at what I’ve been up to–

Some of these burp cloths will be headed to Craftland in Providence tomorrow, and the rest will come with me to the DIY Trunk Show in a few weeks.

Lots of puppets in the works these days. It’s always a challenge to anticipate what will be popular one year to the next, but these are all a good bet.

Liz Lemon may be off the air, but she’s on the docket in the studio plenty right now.

I snapped a photo of this bib late the other night because at 1am, the idea of a carrot conversation seemed absolutely hilarious. This is what happens when you stay up all night communing with little felt faces!

A new sign I made for the top of my craft fair puppet display.

My newly organized shipping station. Confession: I’m still not very good at using it and have started tearing up my tabletop looking for tape more than once, only to discover it put away here, where it’s supposed to be.

Tiny ears, waiting to be sewing into a puppet.

Packing up restock orders for stores is always a bit of chaos.

We’ve been in our house over two and a half years now, and it took until this weekend to finally put anything up on the walls of the studio. Mind you, that room has needed probably the biggest makeover of the whole place. I’ve written before about the walls in this room— we first thought they were paneling, only to discover the “interesting” choice to cover the walls in faux wood contact paper.

After removing the paper (basically just a gigantic sticker), we painted the room a bright minty turquoise which, to be honest, took me a bit to get used. Though it’s nearly the exact same color I painted the kitchen area, it’s crazy how different light will change how a color appears. Eventually it grew on me (or not wanting to buy more paint and redo the room grew on me : ) ) and over the weekend weekend, almost a year later on the dot since the paint job, I finally got around to hanging things up on the wall. There’s still plenty to do to “finish” the room, but it’s nice to finally have some inspiring things to look at.

Of the hundreds of Martha Stewart tricks that are out there, this is probably the only one I’ve ever actually adopted– tracing the pictures you want to hang in paper first to adjust the layout before you start hammering any nails. So obvious, so smart. 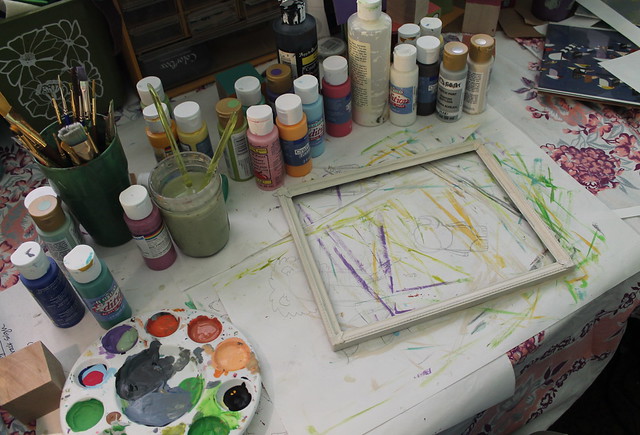 Real talk: this is my mess of a workspace. I painted old metal thrift store frame white to frame a new picture in a more flattering way. 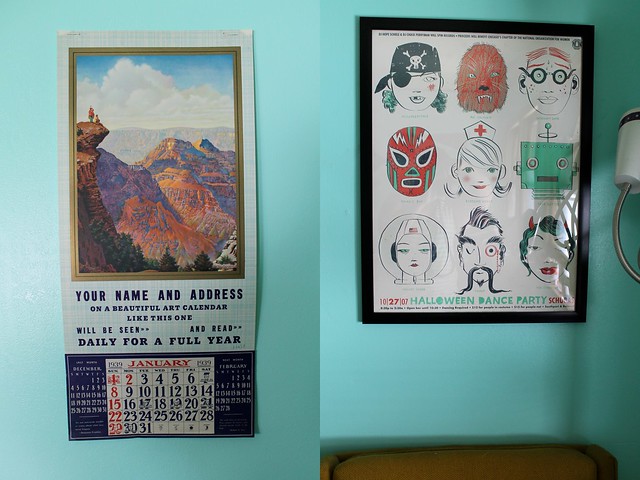 A couple of things on display on some of the smaller walls in the studio– the calendar sample was on of many treasures discovered in Uncle Fun‘s basement during their closing sale. The Anne Benjamin print I spotted at Earwax (also now closed. Why do all my favorite places close?) shortly after moving to Chicago and loved so much I very nearly stole it off the announcement board that night. When I saw her selling one at Renegade a year or so later I was so thrilled I snapped it up on the spot and it lived in our bedroom for a number of years. The colors work perfectly in the studio (and Henry enjoys saying “Arrrgh” the the pirate every time he sees it). 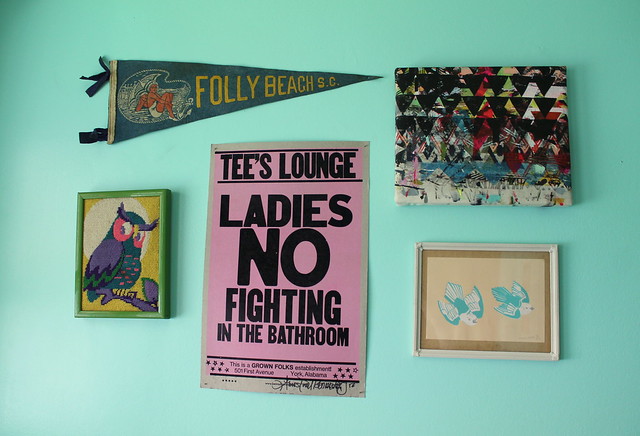 The final (for now) gallery wall including a vintage pennant I found on Ebay, my new Earth Cadets screenprint (which was the impetus to finally hang things up), a bird print by Memo Helen, Amos Paul Kennedy broadside I got at DUCF last winter, and a vintage needlepoint owl thrifted by my sister-in-law a few years back.

Now, how’s that for eye candy the next time I’m looking for inspiration, eh? I don’t think I’ll have an excuse for an artistic slump ever again looking at all these beauties!

My first show of the year is coming up in a few weeks, so studio time is now all about prep and getting things ready. Now that shows are fewer and farther between, sometimes I forget how much work goes into getting ready. Like this time, I totally spaced how close the event was up until a week ago. Whoops! 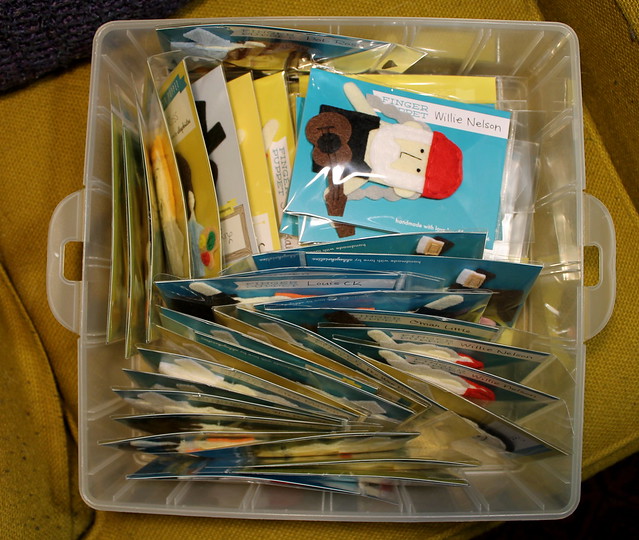 Most of the year I’m concentrating on the pop culture character puppets, but for craft fairs I like to offer the simpler animal and monsters, too. They’re less expensive and kids, obviously, totally dig them. Many a kiddo has shown up at my table eyeing a puppet monkey and not sure how much change she’ll get back from her $10 allowance money. 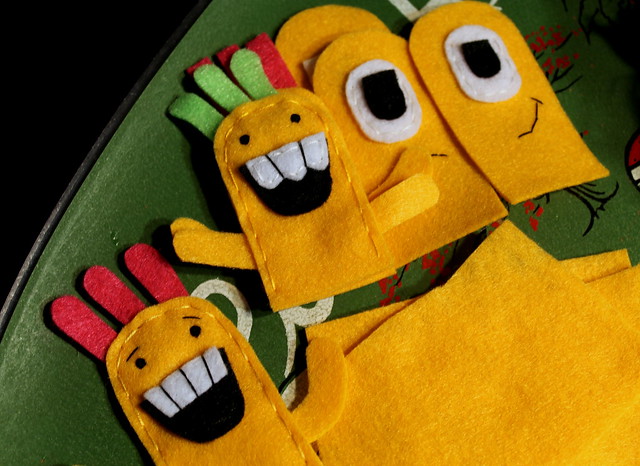 Though I say it every year, I’m also planning on debuting a couple of event-specific designs for Handicraft Exchange. Here’s a sneak peek that probably means nothing right now, but will eventually be familiar to any Hoosier worth her stuff.

Though it looks like Annie, it totally isn’t, I promise. Stay tuned ; )

Recovering from the crazy/awesome holiday season, I spent a decent chunk of my time in the studio last month playing around with stuff I hadn’t tried in quite a while– digging out paints that hadn’t been touched in years and illustrating on the computer (which proved frustrating, given the stopgap external monitor I currently have set up with my ailing laptop). So far I don’t really have anything finished to share, but it was a good exercise in stretching creative muscles that hadn’t been used in a while.

The internet is full of a zillion creative workspace beauty shots and I don’t know about you, but it’s hard for me to imagine anyone actually getting anything done with everything in place. The photos are beautiful, sure, but partly as an counter to that (and partly because my studio is so rarely anything but messy, let’s be honest) I’m sharing what my work table actually looks like right now: a million bottles of craft paint, used palettes, dirty paint water, half-finished puppets, lists and notes and shipping supplies. It’s not glamourous, but to me this says “jump in and make something” more than a sparkly clean tabletop ever will.

Harold and Maude are one of my oldest puppet designs (check out these photos from their first sale back in 2007!). Even after making them for years, it’s still always a challenge to make a pair that matches in size. Usually I can get a majority that work together out of a batch of 4 or 6 of each, but sometimes I end up with orphan too-big Maudes and too-small Harolds that have to wait for the next batch to find a mate. It’s the challenge of making things that are less than four inches tall– the margin of error is pretty teeny.

I still haven’t put anything up on the walls of the studio since I painted last summer. The big expanse of aqua wall is just so lovely, I’m paralyzed with the idea of messing it up. One of these days I’ll get inspired and finally get out the hammer and nails, but in the meantime this Amos Paul Kennedy print and the vintage calendars I picked up at the Uncle Fun closing sale are hanging out on the dresser.

These are drawers are from the salvaged hardware store display that holds my collection of embroidery floss (a view of it was featured in another post on my studio space). Normally you can only see a bit of the color peeking through the front, but when I refill them it’s always fun to see the rainbow of colored skeins all laid out. It was a lucky break that these drawers built for screws and nails just so happen to fit the length of floss perfectly.

Holiday prep is in full swing around here, though it’s counting less and less as prep these days and more, just, well, the holidays, I guess. The kick in the pants I gave myself to start early this year has left the season feeling less overwhelming so far, which has been nice. Nothing like getting a jump on your work for those evenings when the toddler decides that bedtime is optional. Here are a couple of studio shots, because productive mess is good mess, right?

Desktop with puppets waiting to be packaged and various project odds and ends. This will be clean again sometime in January, most likely.

One of many goals sheets. Watching those hash marks add up is the best.

These guys are orphaned Tenenbaums waiting for a third that matches their size. Matching sizes on puppet sets is surprisingly tricky sometimes since the margin of error on a 4″ puppet is tiny.

What I’m working on for the Plush You show at Schmancy in Seattle next month!

I talk more about the set in an interview this week on the Plush You’s site.

Get excited! Big reveal of the puppets themselves coming tomorrow.

With all the recent upgrades to my studio (rearranging, painting the walls, and, well, actually cleaning things up…) I’m much more inspired to share photos of the space. Funny how getting rid of horrible wood-grain wallpaper and piles of crap will do that, huh? Gorgeous summershine doesn’t hurt either. Here are a few snaps from the past couple weeks of my favorite details, supplies and works in progress from around the studio.

It’s amazing that this system of embroidery floss storage works, but I swear that it does.

Tools at the ready

Supplies for a project I’ve been meaning to start for, oh, 3 months now? See, crafters have unfinished craft projects, too.

I’ve been hard at work for the past few weeks finishing up another big order for another new shop in Canada (!). One of the owners of Workshop Studio & Boutique and Flock Boutique in Ottawa, Ontario saw my puppets at Dots +Loops Handmade and asked to carry them as well. Super exciting, right? I’m taking over Canada, folks!

My favorite part of the story is that the shops currently carry a line of finger puppets of Canadian politicians that mine will get to accompany. There aren’t too many of us character finger puppet makers so it’s great to find out that mine will have company! The Workshop/Flock shipment went out last week, and here are a couple of shots from the studio while I was finishing it up–

Packaging puppets (among other projects)